Key-words
Residence - Peribolos - Figurine - Hearth/Kiln/Oven - Plant remains - Bone - Domestic space - Sanctuary
Type of Operation
Study
Institution
British School at Athens
Toponym
Lefkandi
Linked Record
19941995199620032005200620072008200920112012201320142015
Report
Lefkandi, Xeropolis. Irene Lemos (Oxford/BSA) reports on continuing study of material that took place over two periods in Spring and Summer of 2015. The former focused on study of the exceptional figurines from Region II and small finds from both Regions I and II, while the stratigraphical sequences of the ‘Ritual Zone’ were also examined to provide contextual information for bioarchaeological specialists to use in conference papers for a conference. During the latter, work continued towards the completion of the study and the preparation for publication of Region I; preliminary study of the ‘Ritual Zone’ in Region II was also initiated (Fig. 1). In addition to archaeological study, the project engaged in outreach activities, offering guided tours, with Dr Dimitrios Christodoulou (Ephoreia of Antiquities of Euboea), for the local community and the cultural society of Vasiliko, as well as for 200 army officers from the military academy at Chalkis.

The Spring season allowed Caroline Thurston (Oxford) to study terracotta figurines and models. Irene Lemos worked on the stratigraphy of Region II of the Xeropolis sites, particularly the ‘Ritual Zone’. Her study provided a framework for Alexandra Livarda and Georgia Kotzamani (Archaeobotany), together with Tatiana Theodoropoulou (molluscs) and Alex Mulhall (zooarchaeology) to prepare papers (summarised below) for delivery at Beyond the Polis: Ritual practices and the construction of social identity in early Greece, a conference held in Brussels in September, at which Caroline Thurston also presented her work on the figurines. Caroline studied 58 previously uncatalogued fragments from Region II, all identified in post-excavation processing. Striking was the identification of five boat models (Fig. 2), as against the two already known from the 2003-2008 excavations. There are also many fragments of wheelmade quadruped figurines (Fig. 3), while a piece of a Mycenaean chariot group and two bird figurines were also identified.
The Summer season was devoted to checking the assignments of all the archaeological units and their finds allocated to the buildings in Region I. Starting with those structures that are going to be entirely published, finds allocated to each building and their various phases were double checked and especially those discovered in the Building M (the so-called ‘Megaron’) and the buildings in area P (studied in 2014); the same checking list was employed for the finds from the two large pits 13 and 19.

Irene Lemos, together with Dr A. Georgiou (Bronze Age) and Dr A. Vacek (Iron Age) continued cataloguing ceramics mostly from Region I, but also Region II. I. Whitbread and A. Liveriatou focused on checking and consolidating work on coarse ware from Region I whilst beginning to examine Region II material. They also commenced petrographic analysis on samples of clay collected in the 2014 season, undertaken in collaboration with the BSA’s Fitch Laboratory. Preliminary petrographic results show that a range of clays occur in the region and may be related to different pottery fabrics at Lefkandi. Variation in the sand, silt and clay contents of sedimentary units within the modern Phylla clay pits is currently being evaluated against thin sections of fine and medium coarse ware. These clays are finer than the coarsest Lefkandi pottery fabrics, e.g. cooking ware, for which petrographically similar fabrics were obtained from clayey soils at Afrati and in the vicinity of the modern coast. Primary clay from the Afrati serpentinite deposit shows similarities to samples of serpentinite-bearing coarse ware pottery found at Lefkandi. In contrast, clay from weathered volcanic rock cropping out to the north of Lefkandi is not consistent with thin-sectioned samples of Late Bronze Age to Early Iron Age pottery from the site.

Study of 2,466 bone specimens from the ‘Ritual Zone’of Region II suggested that these samples were similar in species representation to other areas of the site. Further analysis of body part representation, burning patterns and taphonomy enabled the hypothesis to be advanced that the animal bones associated with Structure B in Region II were little disturbed and might attest to consumption or feasting activities. Selected remains of deer (predominantly antlers), dogs and lions demonstrated the varied nature of ritual activities at Xeropolis. Among the three lion bones found to date, the single specimen from Region II stood out as constituting food waste. It appears therefore that, although evidence for certain aspects of ritual behavior in Region II is clear, the behaviours attested were a component of related practices taking place beyond the ‘ritual zone’ in otherwise ‘domestic’ spheres. Archaeobotanical evidence from Structures A, B and C in Region II contained the most common plant produce in the settlement, exhibiting a similar range of plant species to other areas of the site. The main food plants encountered include cereals (einkorn, emmer, barley), various legumes (lentils, bitter vetch, grass pea), fruits (grape, olive, fig) and several wild species. Particularly interesting finds were free threshing wheat, exclusively in Structure C, and coriander from Structure A (also found in ‘Megaron’ deposits). It is possible, therefore, that plant foods in the Xeropolis ‘Ritual Zone’ played a performative role in communal activities. Finally, marine animal remains were mainly concentrated inside and outside Structure C, with only a few dozen shells from nearby Structures A and B. The shell remains in Structure C therefore follow a similar pattern to that of the mammal remains and other features: i.e. an area where eating and drinking took place. Marine shells were mostly found inside rather than outside the Structure, and included murex shells, horn shells, thorny oysters, fan shells, oysters, limpets, as well as a variety of other shells in small quantities. They are usually heavily crushed, but neither their degree nor pattern of fragmentation differs from those observed in other areas of the site. Nevertheless, both the important concentrations in this structure as well as the association of these finds with other lines of evidence (pottery, animal bones, seeds) may offer an interesting compilation of data that can confirm or refute the ritual vs. everyday consumption of marine foodstuffs.
Author
John BENNET
Bibliographic reference(s)
Unpublished report, British School at Athens.
Date of creation
2016-08-29 00:00:00
Last modification
2021-05-23 07:21:50
Picture(s) Fig. 1/ Lefkandi-Xeropolis, architectural remains of the ‘Ritual Zone’ west of the Walls in Region II. 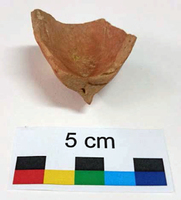 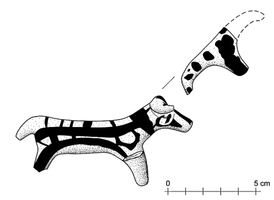