Excavation of the large building in the S part of the settlement (Trench 1) continued in room 4, where at least one floor level over a thick fill of stones was identified (Fig. 2). Ceramics from the upper level belonged to the Neopalatial period; those in the lower level to the Protopalatial. Among a small number of small-finds was the head of a ceramic bull rhyton.

N of this building another large Neopalatial building, its orientation SW-NE, was identified. It comprised large rooms containing a quantity of LM I ceramics, with many complete or fragmentary conical cups, animal bones and small-finds, including a stone bird’s nest bowl.

In the area of the “Sanctuary”, the interior of the Neopalatial structure was investigated: in the area SW of the entrance, the deposits reached a considerable depth below the level of the threshold. Among the large stone in this fill were fund fragments of plaster of various colours, some decorated.

The Hellenistic presence in the area of the settlement is limited – for the present – to the foundations of a small rectangular building and a long wall with a stone pile to the NW of the building.

In the area of the cemetery excavation continued in pockets of deposit not investigated by Xanthoudidis or at lower levels than his excavations. The 2 most significant discoveries were:

1. Confirmation of the existence of an earlier floor in the open area of the cemetery, which Xanthoudidis had not revealed. Apart from the large quantity of human bone from secondary burials and ceramics, a large number of small-finds was collected: 140 beads of various colours, 2 thin gold bands, 7 seals (Fig. 3), 5 partially preserved stone vessels, including a miniature phiale of rock crystal, a small triangular bronze blade and a quantity of obsidian blades. Most significant were a complete gold diadem with punched decoration of dots and a marble idol of Koumasa type (Fig. 4) found among remains of a secondary burial E of funerary building Gamma.

2. The identification of a small funerary deposit, circular in form with a surround of large, vertical stones, between tholos tomb A and funerary building Gamma, but at a much lower level. Three different layers of deposition of secondary burials were detected, associated with fragmentary or almost complete vessels. A vessel from the uppermost layer was decorated in characteristic Koumasa style, giving a clear indication of a EM IIA date for the final use phase of this feature.
Author
John BENNET
Bibliographic reference(s)
Ergon  (2015) 45-48
Date of creation
2016-07-06 00:00:00
Last modification
2018-08-22 09:24:48
Picture(s) 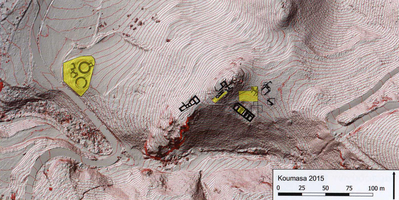 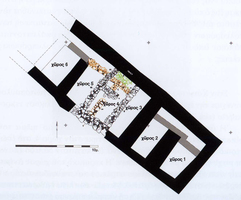 Fig. 2/ Koumasa, plan of the large Neopalatial building in the south section of the settlement. 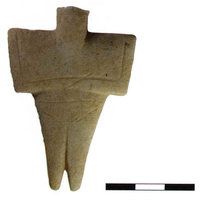