The large ceramic kiln N of workshop space 13 (Fig. 1), used for firing large vessels, was completely revealed: the central pillar was preserved, while the firing chamber was only partially preserved. Space 57a functioned as a supporting area for the workshop.

Space 57 was excavated to floor level: it is a significant room, its floor paved with limestone slabs, and its N, E and W walls equipped with benches surrounding a hearth (Fig. 2). Among the numerous clay finds was an ivory bead.

Beneath room 56 the other section of a polythyron was excavated, its other half excavated in 2014. In room 27, beneath a dense level of fallen stone, was found a number of ceramic vessels fallen from shelves, grinders and a bronze pin. In the adjacent room 58, separated by a wall following the LM IA earthquake, was found a stone table immediately adjacent to a hearth.

In room 37 one of the upper floors was excavated: the floor was made of clay, lepidochoma and small schist slabs over sturdy beams. A group of LM IA vessels was found in the NW corner, together with incised jugs, a spherical rhyton, a stone bird’s nest bowl and grinders.

In room 35a were found fresco fragments fallen from above, including decoration of a dolphin among rocks, architectural and plant motifs (Fig. 3). In the southern part, in a heavily burnt context, were found groups of vessels, grinders and a lamp, all fallen from above, where there had been a hearth. In the eastern part were found a bronze ring with ritual scenes and an unfinished sealstone. In a baulk left in room 35b, were found a bronze double axe and 2 bronze awls, together with a lamp and vessels, including a rhyton. Presumably this double axe fell, like that found in 2014 in corridor 10, from an upper storey.

Of architectural interest is the broad corridor 34 (Fig. 4), revealed under massive stones fallen from neighbouring walls, which led into room 43 (Fig. 5), a room divided in two by a plastered pillar, to which a plastered bench was attached; another 2 benches, also plastered, ran along the W and S walls. On the S wall the base of a polythyron of the upper storey was revealed.

A section documenting the large catastrophe the building sustained in LM IA was left in the S part of room 51 (over the earlier rooms 50-52, 30). Cleaning in 2015 revealed a striking polythyron, which, together with that revealed in earlier seasons under the E wall of room 51, attests to the rich architecture of the building before the MM III – LM IA period. Half of a miniature bronze double axe was found in the polythyron. 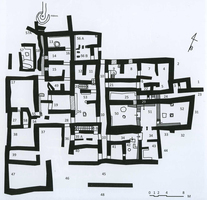 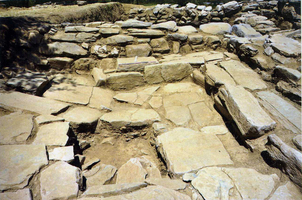 Fig. 2/ Zominthos, Space 57 with limestone slab paving and benches on the north, east and west walls. 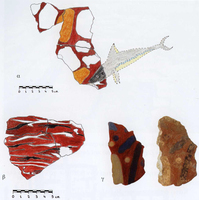 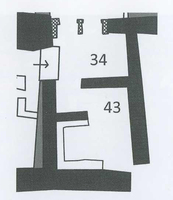