Plaka, Adrianou 80 and Diogenous 3 Streets (property of A. and N. Bogdanou). Dimitris Sourlas (Α’ ΕΠΚΑ) reports on the discovery of Byzantine remains. The plot concerned is adjacent to the building identified as the Pantheon or the Panhellenion. Part of a Justinian fortification tower was revealed. The tower is preserved to a height of 5m. Its western and north sides were set on top of the Hadrianic foundations. Its north face is constructed from reused poros and marble blocks (Fig. 1). Its south side is hardly preserved. The tower appears to have been used in later periods, since there are door and window openings. Additionally, its interior preserves marks from roof beams.

The joint between the tower and the fortification wall is badly preserved. The width of the wall is less than 1 m. It is constructed from poros blocks, tiles and mortar. A marble gate was excavated from the middle of the revealed section of the wall (Fig 2.). This gate was known to us from drawings and descriptions dating in the first quarter of the 20th century. The lower part of the gate had been converted into a fountain in later periods (Fig. 3). It upper part had been shut in later periods with rubble.

Finally, a section of the church of Panagia Krystaliotissa was revealed. The church preserves post-byzantine wall paintings with floral motifs. Reused marble architectural members (column bases, column capitals and column drums) were found in its apse and served as the altar (Fig. 4).

Fig. 1/ Plaka, Adrianou 80 and Diogenous 3 Streets (property of A. and N. Bogdanou), the east face of the tower.

Fig. 2/ Plaka, Adrianou 80 and Diogenous 3 Streets (property of A. and N. Bogdanou), the wall and the marble gate. 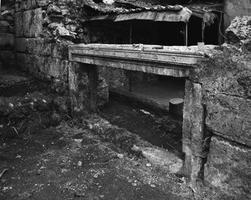 Fig. 3/ Plaka, Adrianou 80 and Diogenous 3 Streets (property of A. and N. Bogdanou), the marble gate. 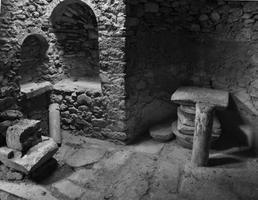