Key-words
Fortifications - Commercial area - Domestic space - Production/extraction site - Sanctuary - Building Type - Site Type
Type of Operation
Excavation - Rescue excavation
Institution
Ministry of Culture, Education and Religious Affairs: ΛΣτ' ΕΠΚΑ
Toponym
Ag. Thomas
Linked Record
2014
Report
Alikyrna. O. Vikatou (ΛΣτ' ΕΠΚΑ) reports the discovery of an extensive part of the the late Classical-Hellenistic city during the construction of the Ionia Odos motorway near Missolonghi. The city is located on the hill of Chilia Spitia, in the area of Ag. Thomas, between the territories of ancient Kalydon and Pleuron. On the northernmost peak of the hill lay the remains of the small fortification circuit around the acropolis, which enclosed an area of ca. 2ha. This is an extensive plateau which extends from the southwest edge of the hill to the natural face to the west which bounds the modern water course of Ag. Symeon
The Ionia Odos runs for some 400m from the heart of the city, and a total area of ca. 2ha has now been explored. Since its inception in 2011, excavation has revealed part of the commenrcial centre and the grid plan of the city. Four streets (4.5m wide) have been found running north-south, 32m apart, while a wider (5.2m) east west street was probably the central artery of the city. The streets were bounded by retaining walls (0.6-0.8m thick) built of unworked local sandstone. To date parts of 10 complexes have been revealed, mostly used for commerical and manufacturing purposes (warehouses, workshops and shops).
On the bank of the Ag. Symeon stream, a votive deposit (6 x 7m) contained over 15,000 mostly Hellenistic sherds and figurines from a sanctuary yet to be located (noting that on the plateau above the stream bank, some 50m from the deposit, an extensive complex of at least three multi-roomed buildings requires further investigation). On one side the deposit was bounded by two parallel walls. Figurines (almost all fragmentary) form the largest part of the material, dominated by female forms of the known range of types usually dedicated to female deities. but with some animals and brids, a few Nikes, and a large group of images of girls. Seated forms include, in addition to women, pupils seated on a bench with writing tablets, and infant girls holding bunches of grapes. A number of figurines may be linked to ritual, such as hydria-bearers, figures in the form of thymiateria, and dancers (including ring dances which represent a continuation of the Archaic Corinthian type). Animals include pigs, bovids, rams and horses, and birds include doves and cockerels. A group of masks depict satryrs and actors in New Comedy, and there were also figures of Erotes from composite groups. While there are no identifiable images of any particular deity, the wider imagery points to the circles of Artemis, Dionysos and Aphrodite, as well as Demeter and Kore (noting a three-headed Cerberus). A rare male figure carrying a torch and branches may be an initiate.


A Protogeometric settlement was found on the southern peak of the hill (the site of the Hellenistic acropolis). An eighth-century BC cist grave was found on the eastern slope of the hill.
In Hellenistic times, the city extended onto the plain surrounding the hill: house foundations were visible in a number of places, and the settlement was surrounded by a peribolos. A 17m-long stretch of water channel located on the western slope of the hill may be a public installation. Settlement remains have so far been found in two locations: a Hellenistic potter's kiln at Metochi and the slight remains of a probable house just to the south of the fortified hill.

Antiquities can be observed up the modern national road from Antirrhio to Ioannina and the settlement of Ag. Ioannis, where trial trenches exposed Hellenistic settlement remains. S. Alexandropoulou places in the vicinity of Ag. Ioannis ancient Elaos, a fortified site known only from Polybius' account (IV.65.6) of Philip V's campaign from ancient Oiniades into southern Aetolia in 219 BC.
Evidence for the city's cemeteries consists of a group of early Hellenistic tombs (dating to the second half of the fourth century) on the south slope of the hill, as well as an underground chamber tomb of Macedonian type, of the first half of the third century.
Evidence of the Roman period includes a second-century AD bath complex which should probably be linked to the construction of the Trajanic road from Patras to Nikopolis (which passed to the north). The complex was destroyed by the strong earthquake of 551 AD which affected Aetoloakarnania and all of the northwest Peloponnese.
Author
Catherine MORGAN
Bibliographic reference(s)
http://www.arxaiologia.gr; Eleutheros Typos 21/10/2014; Naftemboriki 21/10/2014; Kathimerini 21/10/2014
Date of creation
2015-08-14 00:00:00
Last modification
2018-08-22 09:24:46
Picture(s) 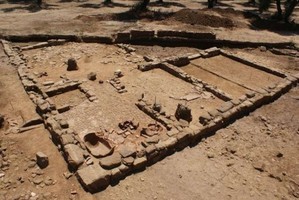 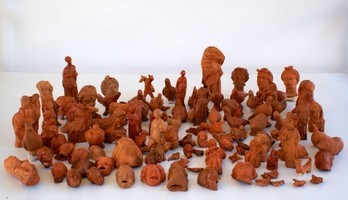