Key-words
Tomb - Tools/weapons - Dress and personal ornament - Cave - Building Type - Find Type - Site Type
Type of Operation
Excavation - Research excavation
Institution
Ministry of Culture, Education, and Religious Affairs
Toponym
Diros
Linked Record
20052014
Report
Xagounaki, near Alepotrypa Cave, Diros. G. Papathanasopoulos (Director emeritus, Ministry of Culture, Education and Religious Affairs) reports on the 2014 excavation season. Of particular significance are two undisturbed tombs of the same date containing double burials, in each case of a young adult man and woman. The individuals in the first burial embraced each other, Fig.2, while those in the second were exceptionally tightly contracted and in contact with broken spearheads. A radiocarbon date of 3800 BC is reported for the first grave (deviation and calibration are not reported). Final Neolithic levels (4200-3800 BC) also included an undisturbed primary double child burial held in a vessel (Fig.1) and the undisturbed burial of an embryo.
New dating and analytical results have established that the cave was in use for a long period, from early to Final Neolithic (6,000-3,200 BC), for both settlement and burial.
In the overlying levels was a round bone-enclosure, 4m in diameter, defined by field stones and with a pebble floor (Fig. 3). A large quantity of human skeletal remains, representing tens of individuals, was collected from the floor surface, together with characteristic LH III objects (e.g. pottery, beads, and a dagger, Figs 4, 5, 6). This structure is so far unique in the Mycenaean record. Initial study of the skeletal remains indicate that they are in secondary deposition, i.e. removed from their primary burial contexts in the Xagounaki area. As yet no Mycenaean settlement remains have been found in the wider area of the cave, even though it has been systematically surveyed. The closest site of the period is at Ag. Vasileios, at least 40km away.
Author
Catherine MORGAN
Bibliographic reference(s)
Ministry of Culture, Education, and Religious Affairs, Press Release 12.2.2015
Date of creation
2015-06-29 00:00:00
Last modification
2018-08-22 09:24:46
Picture(s) 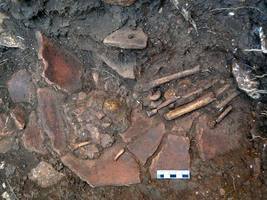 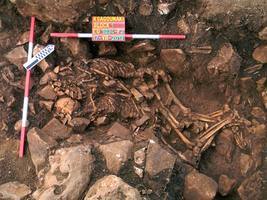 Fig. 2/ Xagounaki, near Alepotrypa Cave, Diros, individuals embracing each other. 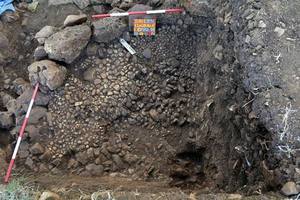 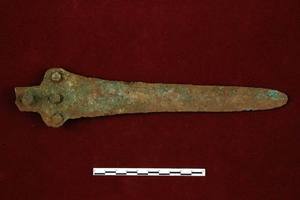