Key-words
Domestic space
Type of Operation
Study
Institution
British School at Athens
Toponym
Lefkandi
Linked Record
19941995199620032005200620072008200920112012201320142015
Report
Lefkandi – Xeropolis. I. Lemos (Oxford/BSA) reports on continuing study. In collaboration with the Swiss School of Archaeology in Greece (Eretria excavations) and Dr Matthieu Ghilardi (CNRS), cores were drilled at Lefkandi, Eretria, and Aliveri for a project to investigate the evolution of the coastline of central and southwest Euboea. Preliminary examination indicates that cores from the eastern harbour of Xeropolis include marine incursions and macro fauna.
New radiocarbon dates from Lefkandi, Kalapodi, and Corinth (obtained in collaboration with the Weizmann Institute, Israel) appeared in PLOS ONE 8:12 (December 2013), 1-12. The proceedings of a round table organized with the Austrian Institute of Archaeology at Athens (M. Kerschner and I.S. Lemos [eds], Archaeometric Analyses of Euboean and Euboean Related Pottery: New Results and their Interpretations [Vienna 2014]), based on Neutron Activation Analysis of 141 samples, present the most extensive archaeometric investigation of Euboean and Euboean-related pottery to date. Lefkandi is also contributing to new work on Euboean fabrics. As part of a wider Fitch Laboratory programme of petrographical and chemical (WD-XRF) analysis centred on Eretria, potential raw materials for pottery production were collected from locations near Lefkandi, Phylla and Afrati which represent the principal range of rock types present. Previously sampled locations were also included for the purpose of correlation with earlier analytical programmes.
Study of the architecture and stratigraphy of Xeropolis focused on Area P, and the ‘hearth’ inside the north end of Building M1 which remained an important feature during the long period of use of successive megara. In Area P, the earliest excavated building, P1 (part of the South House), had two main phases of occupation dating to Lefkandi Phase 2b (with Middle Protogeometric floor levels) and Lefkandi Phase 2b/3. The successive structures were on different alignments, probably due to subsidence requiring levelling. Building P2a, located by the north baulk of Area P and reconstructed on the basis of Sub-Protogeometric plaster floors and fragmentary walls, is a rare ninth-century building on Xeropolis. It was a large structure (the western apse is 5.8m in diameter), larger than the Late Geometric house excavated by Popham and Sackett. Building P3 (on the floor of which the ‘centaur’ figurine was excavated in 2006) is also ninth-century but postdates P2. This is not the latest structure in the area, noting the presence of one wall at a higher level to the west and a Late Geometric pithos in the same area.
The Lefkandi shell assemblage, one of the largest in the Greek Early Iron Age, provides an outstanding opportunity to reconstruct the fishing and collecting activities of a seaside community, and to understand them in the overall context of agro-pastoral activity. Completion of the field study of marine faunal remains (by Tatiana Theodoropoulou) permits general observations about what was evidently intensive and coherent exploitation of marine habitats over time. Exploitation of mixed substrates (gravel, sand, and mud), such as those near the settlement, expanded from the shore to the deeper waters of the Euboean gulf, with collecting methods ranging from the simple (hand-collection or the use of knives) to the elaborate (diving or trawling). Collection of molluscs from the rocky shores was less common. Murex shells (usually crushed) are found in almost every context and period. (Fig. 1) The edible Hexaplex trunculus was probably consumed: shell waste was sometimes thrown into the hearth either as fuel or for disposal. However murex shells also produce purple-dye, and although no production installations have been found and considerable quantities of molluscs would be necessary to substantiate industrial production, the hypothesis of dye extraction at a household or artisanal level will be investigated.
Oysters (Ostreidae) and fan shells (Pinnidae) were common marine resources, the latter being preferred in the deeper layers of the settlement. Fan shells offer both an impressive nacreous shell and the filamentous substance commonly called ‘sea-silk’. The exploitation of the hard and soft tissue of this shell is thus to be explored. Other resources occasionally exploited were Noah’s arks (Arcidae), horn shells (Cerithidae), thorny oysters (Spondylidae), clams (Veneridae), crabs, topshells (Trochidae) and limpets (Pattelidae), as well as smaller shells, such as cowries (Cypraeidae), cones (Conidae) and dove shells (Columbellidae). Several of these molluscs had been collected dead on the beach and were exploited for their shell: worn thorny oysters were used as scoops, and cones, dove shells and horn shells were used as ornaments (cone shells were frequently found in pairs). A small piece of unworked coral was also found.
Fish were consumed at Lefkandi, but on a more limited scale. Species include near-shore fish such as the gilthead seabream and other breams (Sparidae), the European sea bass (Moronidae) and grey mullet (Mugilidae), as well as medium-sized sharks and rays. The last must have entailed extraordinary and likely memorable fishing occasions, as one pierced ray vertebra (perhaps an amulet) suggests.
Author
Catherine MORGAN
Bibliographic reference(s)
Unpublished field report, British School at Athens
Date of creation
2015-06-29 00:00:00
Last modification
2021-05-23 07:21:36
Picture(s) 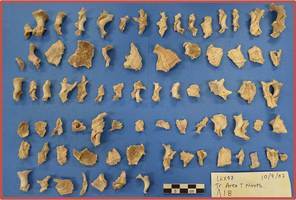