Key-words
Domestic space - Residence - Fortifications - Public building - Site Type - Building Type
Type of Operation
Excavation - Rescue excavation
Institution
Ministry of Culture (ΛΓ' ΕΠΚΑ)
Toponym
Arta
Linked Record
20032003 (1)20042007
Report
Arta (anc. Ambracia). The IB’ ΕΠΚΑ presents an overview of excavation in the city. On the Youni-Papakosta plot a 17.4m long stretch of the city wall was revealed, below which lay Hellenistic paved streets, and inside the wall line a public building (fig. 1). On the Georgoula property, an early fourth-century semi-circular tower was found in contact with another part of the northern branch of the wall. (fig. 2).
Among the houses, workshops, roads, water channels etc. discovered across the modern city, attention is drawn to one particular insula. The andron of a Hellenistic house on the Mitsokali property has a pebble floor mosaic depicting a chariot, male figures dancing around two opposed ibexes below a kantharos, and rich plant motifs. (fig. 3).
On the edge of the northwest cemetery (on the Theodorou plot), an olive oil workshop was built in the late fourth or early third century BC and remained in use (with various structural alterations) until its destruction in the late first or early second century AD. 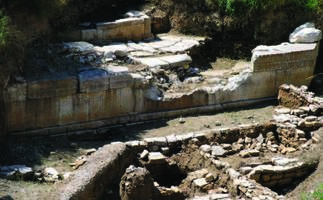 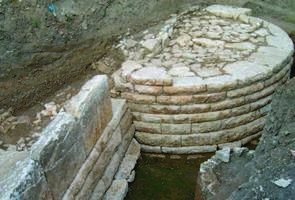 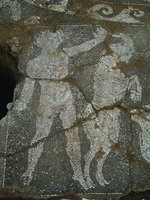