Key-words
Bone - Cave
Type of Operation
Study
Institution
ASCSA
Toponym
Frankhthi
Linked Record
198819891993199420002000 (1)20072008200920102011201220132014
Report
Franchthi Cave. N.D. Munro and M.C. Stiner (ASCSA) summarise progress in the study of faunal remains.
Following the adoption of farming (ca 8000 cal BP), humans continued to use Franchthi Cave for close to five thousand years. Occupation spans much of the regional Neolithic sequence (Initial, Early, Middle, and Late) and thus provides a rare opportunity to explore the early evolution of herd management strategies in southern Greece. Analysis of the Neolithic sequence from Trench F/AN Units 111-59 was completed in 2013, along with 75% of the Ceramic Neolithic sequence from Trench F/AS. To date, 18,250 specimens have been identified from the Neolithic deposits, and the sample is evenly split between F/AN and F/AS.
The entire Neolithic F/AN and F/AN sequence is dominated by domestic ungulates, ovicaprids in particular (Fig. 1). Cattle are rare in the F/AN sequence, and appear only sporadically until the Final Neolithic. A few pigs are present in the Initial Neolithic, and their numbers expanded only at the end of this phase in Unit 149. After this point, however, pig remains comprise half of all of the ungulate remains by Unit 139. Their numbers stabilize thereafter at about 25%, until the Final Neolithic when they again increase in importance along with cattle and red deer.
Preliminary analysis of the combined Neolithic assemblage from F/AN indicates that sheep outnumber goat 4:1. This sheep-goat ratio is typical of Neolithic sites from southeastern Europe and Anatolia. Seventy-four percent of the fourth lower premolars from the combined Neolithic ovicaprid assemblage from F/AN (n=74) are deciduous. The permanent fourth premolar comes into wear between 2-2.5 years of age, thus about three-quarters of the animals were culled before they reached 2.5 years of age. The culling pattern is typical of domestic sheep/goat herds raised by humans for meat. Our study also revealed heavy carnivore (dogs and foxes) activity in the cave, including scoring, punctures, crenulation and digestion on the Neolithic remains. Evidence of carnivore feeding activity is present throughout the sequence but does not become important (>10%) until the Middle Neolithic (Fig. 2). The high percentage of digested bones, suggests that the cave served as an overnight or over-wintering area for domestic stock and was frequented heavily by dogs from the Middle Neolithic until the abandonment of the cave.
Author
Catherine MORGAN
Bibliographic reference(s)
Unpublished field report (ASCSA)
Date of creation
2014-07-16 00:00:00
Last modification
2021-03-06 02:48:53
Picture(s) 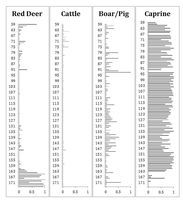