Key-words
Bath - Temple - Stoa - Inscription - Mosaic - Commercial area - Public area - Sanctuary
Type of Operation
Excavation - Research excavation
Institution
ASA
Toponym
Messini (ancient), Messène antique
Linked Record
19931995199719981999200020022004200620072008 (1)20082009 (1)20092010 (1)20102011201220132014201520162017201820192020
Report
Messene. P. Themelis (ASA) reports that the north stoa of the agora was completely exposed. The building is 196m long, with two internal Corinthian colonnades (each of 40 columns) creating three aisles. The façade has a Doric colonnade (the number of columns remains to be determined). Five bases for bronze statues were found in situ between the internal colonnades in the west part of the stoa. Seven rectangular exedrae were set into the interior face of the back wall, with façades of two ionic half-columns between antae. The space between the antae and columns was closed with a screen to a set height in order to control access. Inside the exedrae were bases for marble statues of Messenian dignitaries, with benches on either side of them.
Major alterations were made to the stoa in the first century AD, probably following earthquake damage. The statuary inside the stoa and the extrae was replaced. In the first exedra on the west, a marble statue was set up which (the excavator tentatively suggests) may perhaps represent the Roman tamias and military commander Publius Cornelius Scipio. Statues of the emperors Titus, Vespasian and Domitian, and of Domitia Sebaste, were set up on Hellenistic bases between the columns of the second interior colonnade. A number of (chiefly dedicatory) inscriptions were also found.
In Late Roman times a bath was built in the middle of the stoa using building materials removed from it. This was followed in the 13th century by a small church surrounded by a cemetery of cist graves. A funerary inscription re-used in the construction of one of these graves reads:
ΕΝΘΑΔΕ ΚΟΙΜΑ|ΤΑΙ Θ[ΕΟ]Υ ΔΟΥΛΟΣ|ΑΓΑΘΩΝ ΠΑΝΤΩΝ|ΦΙΛΟΣ ΠΑΣΙΦΙΛΗ|ΤΟΣ ΦΙΛΟΓΥΝΑΙ|ΚΟΣ ΚΑΙ ΦΙΛΟΤΕ|ΚΝΟΣ ΣΟΦΕ ΧΑΙΡΕ|ΖΗΣΑΣ ΕΤΗ ΜΕ
The mosaic around the monopteros which lies below the sanctuary of the theatre basilica revealed a new scene depicting an ass following a young man (identified as ΖΟΣΙΜΟΣ by an inscription). It is suggested that the scene refers to Menander’s lost comedy Messenia. The mosaicist responsible for the floor of the Roman theatre villa is identified in a new inscription reading ΠΑΡΑΜ|ΠΝΟΣ|ΑΝΑΓΝΟ|ΣΤΗΣ Ε|ΠΟΙΗΣΕ.
Author
Catherine MORGAN
Bibliographic reference(s)
Ergon (2013), 24-27
Date of creation
2014-07-15 00:00:00
Last modification
2021-05-24 21:20:36
Picture(s) 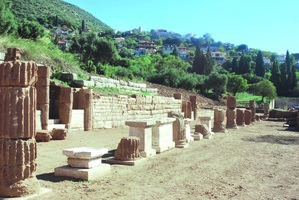 Fig. 1/ Messene, eastern part of the north stoa, bases for the statues of the Flavians. 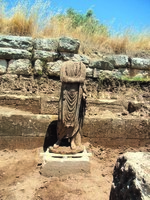 Fig. 2/ Messene, statue of the Roman tamias set up on the exedra. 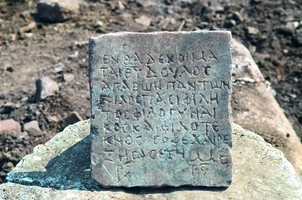 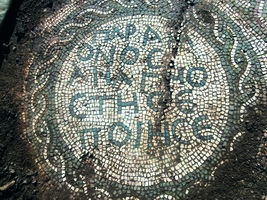