Key-words
Stoa
Type of Operation
Excavation
Institution
Α’ ΕΠΚΑ
Toponym
Stoa tou Evmenous
Linked Record
200120042005
Report
Stoa of Eumenes. M. Briana (Α’ ΕΠΚΑ) reports that the removal of fill in the 30th arch of the Stoa revealed four layers, which included fragments of terracotta pipe belonging to a system which carried water along the Stoa at the level of the foundations of the piers. A large quantity of coarse and fine ceramics at different levels dated from Hellenistic to post-Byzantine and modern times. Other finds include an intact loomweight and nine marble fragments.
The 38th arch (Fig. 1) was found to incorporate architectural members from other sites on the south slope and wider area, some of which certainly belong to the Asklepieion (Figs 2-3). The pottery collected, among which were many sections of pipeline, covers the Hellenistic to post-Byzantine and modern periods.
Author
Robert PITT
Bibliographic reference(s)
AD 60 (2005) Chr. B1 52-56.
Date of creation
2014-03-25 00:00:00
Last modification
2020-02-10 14:11:25
Picture(s) 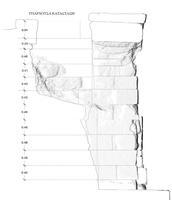 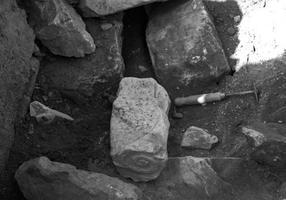