Key-words
Figurine - Inscription - Lamp - Dress and personal ornament - Domestic space - Cemetery - Production/extraction site - Sanctuary - Road system/waterway
Type of Operation
Excavation - Rescue excavation
Institution
Δ’ ΕΠΚΑ
Toponym
Argos
Linked Record
2004
Report
Argos, Kallergi Street (O.T. 159, property of A. Roussou). Ch. Piteros (Δ’ ΕΠΚΑ) reports the discovery of Early Christian and Middle Byzantine housing. Beneath this, an ancient road along the south side of the plot had three Hellenistic-Roman construction phases, plus Early Christian and Middle Byzantine phases too. On either side of the road were building foundations: a worked stone foundation at the west end of the north side included a re-used ionic cyma, while at the east end a Hellenistic building containing a terracotta-lined well continued to the north). An open drain ran along the road, with a terracotta channel on the north side too.
Further north was a Roman workshop complex with two building phases. While its precise function is unclear, there was notable provision for a process involving liquid, from a cement lined structure with a drainage channel in the south, to a hydraulic cement floor in the northeast and a well to the west.
Pottery of the Protogeometric, Geometric, Classical, Hellenistic, Roman and Early Christian periods was recovered from the entire area. Southeast of the workshop was a deposit of Hellenistic domestic pottery including black-glaze vessels, lamps, plaster with red and white colour, a small terracotta triglyph altar, black glaze relief vessels, goat horns, and a figurine of Artemis. A stone table found in the same location preserved two lines of a fourth-century BC votive inscription: [---]ΑΠΟΛΛΩΝΙΔΑΣ ΑΡΙΣΤΟΝΙΚΑ/[---]ΚΟΡΙΝΘΙΩ ΤΑΙ ΑΡΤΑΜΙΤΙ ΑΝΕΘΗΚΑΝ. The inscription and the nature of Hellenistic finds from this area imply the existence of a shrine to the west of this property.
Geometric tombs were found at greater depth. South of the road, a large cist tomb (1) contained two adult inhumations. The earlier burial, pushed to one side, had 14 Early Geometric vessels (three skyphoi, two prochoi, five lekythoi, two pyxides, an amphoriskos and a phiale), while the Late Geometric in situ burial had four kraters, two oinochoes, and a skyphos. The grave also contained three bronze rings. To the west, the enchytrismos of an infant in a small pithos (2) contained a Geometric thilastron, two skyphoi, two cups, two prochoi (one handmade), and a phiale. North of the road was a pithos burial (3) of an adult with Geometric pottery.
Author
Catherine MORGAN
Bibliographic reference(s)
ADelt 56-59 (2001-2004) B4, 59-60.
Date of creation
2013-10-18 00:00:00
Last modification
2020-04-03 10:53:25
Picture(s) 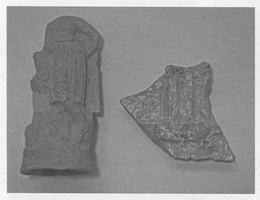 Fig. 1/ Argos, Kallergi Street. Figurine of Artemis and part of an altar. 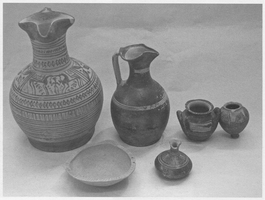