Key-words
Hearth/Kiln/Oven - Dress and personal ornament - Domestic space - Cemetery
Type of Operation
Excavation - Rescue excavation
Institution
Δ’ ΕΠΚΑ
Toponym
Argos
Linked Record
2004
Report
Argos, junction of Danopoulou and Kanellopoulou Streets (property of G. Ioannidi). A. Banaka-Dimaki (Δ’ ΕΠΚΑ) reports the discovery of settlement remains and burials.
A gravel surface extending along the north side of the plot was defined by a wall on the south side. Removal of the gravel revealed that the wall originally defined the south side of a building with two preserved rooms, which extended beyond the plot. One preserved the original stone-paved floor. A further similar wall cannot be securely associated with the structure. The construction technique indicates a Roman date. In the northwest corner of the excavation was a walled, basin-like structure in clay, which may perhaps relate to a kiln located beyond the plot.
In the east part of the plot and along the southern edge were three tile graves. Tomb 1, the best preserved, contained two bronze earrings. Tombs 2 and 3 contained neither bones nor offerings, but their small size implies that they were child graves. In the west and central part of the excavation area was a stony layer containing mostly Geometric sherds. At a slightly greater depth were a small number of Submycenaean-Early Protogeometric graves. Tomb 5, a simple pit, contained a single adult inhumation. Tomb 10, a pithos burial, contained a lekythos and amphoriskos: a section of the pithos removed for the insertion of the burial was then used as a lid. Outside it was an amphora closed by a coarse sherd. Tomb 9, a simple pit the edge of which was partially defined by stones, contained an adult inhumation on a bed of gravel, with a handmade prochous, an Argive monochrome trefoil-mouthed oinochoe and a cup, plus a fragmentary bronze pin and bronze rings. To the south of these burials tomb 4, a slab cist, contained a contracted adult inhumation on a gravel floor, with no grave goods, and tomb 11, a pit grave with cover slabs and a gravel floor, contained a contracted inhumation with a trefoil-mouthed oinochoe, and a bronze item. Three further tombs were found in the southwest part of the excavation. Tomb 6, a pit grave with cover slabs, contained a contracted adult inhumation, a lekythos, trefoil-mouthed oinochoe, and poorly preserved fragments of a bronze and an iron object. Tomb 7, a cist of stone slabs, contained only a few bones. Southeast of this tomb and in contact with it was a handmade vessel with bones.
Author
Catherine MORGAN
Bibliographic reference(s)
ADelt 56-59 (2001-2004) B4, 23-25.
Date of creation
2013-10-17 00:00:00
Last modification
2020-04-03 10:57:40
Picture(s) Fig. 1/ Argos, junction of Danopoulou and Kanellopoulou Streets. Plan of the excavation. 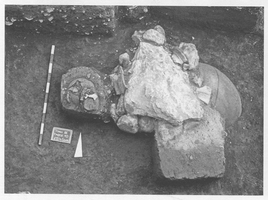 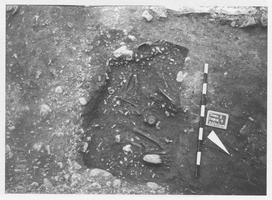 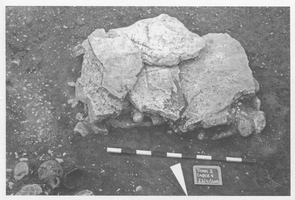 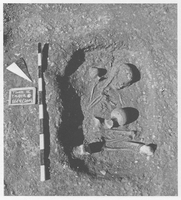