Key-words
Religious building - Numismatics - Cemetery - Sanctuary - Building Type - Find Type - Site Type
Type of Operation
Excavation - Rescue excavation
Institution
25th EBA; ΛΖ ΕΠΚΑ
Toponym
Korinthos, Corinth
Linked Record
2002
Report
Ancient Corinth (property of S. and M. Christou). P. Kasimi (ΛΖ’ ΕΠΚΑ) reports the discovery of 23 (mostly looted) tile and rock-cut graves from a cemetery on the north slope of Acrocorinth, between the sanctuary of Demeter and Kore and the Hadjimustapha fountain. The very few finds include two Byzantine (seventh- to eighth-century AD) vessels in tomb 14, and two fourth-century BC Corinthian coins.
Beneath the graves lay the remains of Classical structures subsequently published by Nancy Bookidis. Four dining halls similar to those excavated in the sanctuary of Demeter and Kore, extend east-west (with doors on the north side). They are partially cut into the bedrock and partially built of ashlar masonry in the local breccia. The largely complete Building 1 had a small service room to the left of the entrance, possibly a second room to the right, a dining room in the centre and a back room with a bench on the west and south sides. Building 3 had two rooms (a door in the back wall of the dining room opened into a second room which was not investigated). Buildings 2 and 4 were less well preserved: both may be one-room structures (although 2 may have had an additional room or rooms to the north of the dining room). Each dining room held eight people. Buildings 2 and 4 lie at a higher level than the likely later Building 1, with their back walls aligned. The Buildings are unlikely to predate the late fourth century BC. The series of buildings likely continues to the west, but to the east only the late tombs and Roman drains are preserved.
Part of a second row of four poorly preserved dining buildings of similar construction lies to the southeast of row 1. The preserved structures are service rooms that lay behind now missing dining rooms. At the east end, Room 5 was divided into a bath stall and perhaps a kitchen. The function of the next rooms, 6 and 7, is uncertain, but they are of the width of dining halls. The fourth room, 8, conatined a bench. To the east and north of row 1, the south wall and north return wall of another building is preserved, its construction technique resembling the Hellenistic dining halls in the Demeter and Kore sanctuary. An isolated cistern lies to the southeast of row 2. In addition to these newly excavated complexes, Bookidis notes the existence of structures to the east of the sanctuary (exposed by torrential rain in 2000), and traces in a severly eroded area at the base of the hill south of the modern road and east of Hadjimustapha.
Bookidis concludes that the buildings are all to be related within one sanctuary complex: by the end of the fourth century BC, dining halls thus covered much of the central part part of the lower north slope of Acrocorinth (over 100 buildings accommodating at least 700 people if not more). 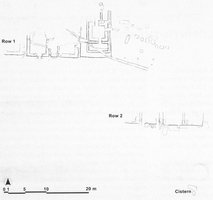 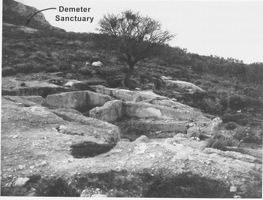 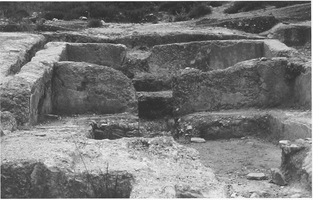 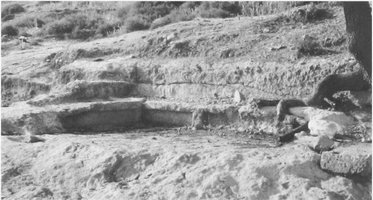 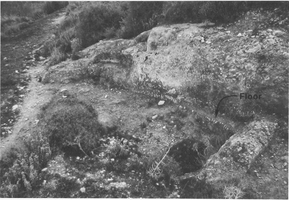 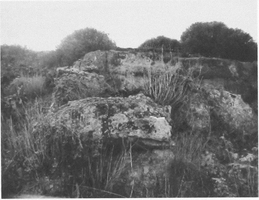 Fig. 7/ Ancient Corinth, cistern from above. 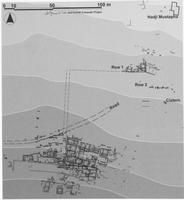