Key-words
Numismatics - Inscription - Agricultural facility - Find Type - Building Type
Type of Operation
Excavation - Rescue excavation
Institution
ΙΒ' ΕΠΚΑ
Toponym
Kalligonio
Linked Record
200020012001 (1)2002
Report
Leukas, Philosophon Street. G. Pliakou (ΙΒ' ΕΠΚΑ) reports on continuing excavation of the extensive construction previously located between the modern Leukas-Nidri road and Anapauseos Street, focusing on sections between Anapauseos and Pephaneromenis Streets. A series of Hellenistic and Roman farmhouses extended north and northwest of the ancient north cemetery, probably beside the ancient road to the second, western harbour in Phlevas bay.
In Section A, a stone-built complex was erected in the fourth century BC and remained in use until Late Hellenistic times, with a later building phase dating to the first century BC-first century AD (Figs 1: 4α; 2-3). The rooms are tightly packed, with some walls re-used in the second phase and others then added (using spolia) – one paved floor of the second phase included inscribed grave stelai. A purple dye workshop may have operated in room 2, where much shell was found: a neighbouring cistern lined with hydraulic cement probably served the workshop. The eastern part of the complex was built in the second phase and itself shows two phases between the first century BC and the third century AD. In this final phase, a well-constructed, brick-built building had rectangular rooms planned in wings around a central courtyard with a well. Certain rooms were workshops. Room 4 in the east wing contained a large stone crushing basin (probably from an olive press to judge from the quantity of olive pits found), with associated storerooms containing pithoi to the north, and to the south in room 6, a hearth which may have provided the hot water required for the separation process (Fig. 4). Two wine presses were found in the south part of the complex (belonging to the successive construction phases) (Fig. 5). Finds from Section A include limestone columns and other architectural remains, many silver and bronze coins (including many issues of Nikopolis), and a hoard of bronze vessels, coins and a statuette of a dancing satyr concealed in one room (Fig. 6).
In Section B, very slight building remains were located – a dense destruction deposit with much tile, with traces of wall beneath (Fig. 1: 4β). A small part of a second building was found 22m to the east. Between these buildings were two tombs. One was a cist grave containing two burials with ceramic vessels, plus a cremation in an Ambracian black-glazed amphora of the late fourth to first half third century BC (of a type manufactured for this purpose), which also contained one or two iron strigils: a terracotta lamp and evidence of burning over the tomb cover indicate offerings to the dead. The second was a tile-covered cist grave which also contained two burials and ceramic vessels. The discovery of a stele inscribed just with the letter Π (for παϊς, following local custom) indicates a child burial in one of the tombs.
In section Γ, an ancient road was found with an extensive building complex (probably a farmhouse) along its south side, partially excavated on either side of the modern road (Figs 1: 4γ; 7-8). The ancient road ran almost parallel to the modern, with a retaining wall on the north side (pottery from the foundation dates to the late fifth and fourth century). The building complex had three construction phases, the earliest of which (dating to the Late Classical-Hellenistic period) was represented by just one stretch of wall. Three rooms of phase 2 were traced, dating from the first century BC to the second century AD, with much earlier building material reused. During this phase the building contained an olive press (part of the press-stone was preserved, also part of the press for olive paste and a nearby pit containing many olive pits) (Fig. 9). This activity probably continued into the third phase of the complex, which lasted to the third century AD. At the southwest corner of the complex were five tile graves without goods. One further ancient grave, probably to be linked with the first construction phase, was found during the opening of a storm drain at the junction of Philosophon and Anapauseos Streets, slightly to the north of the building complex in an area where a cist grave had previously been found (see ADelt 33 [1978] Chr. 182).
Author
Catherine MORGAN
Bibliographic reference(s)
ADelt 56-59 (2001-2004) B5, 39-42.
Date of creation
2013-07-03 00:00:00
Last modification
2018-08-22 09:24:40
Picture(s) 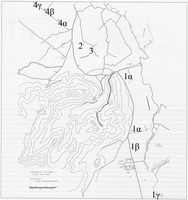 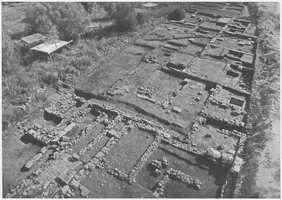 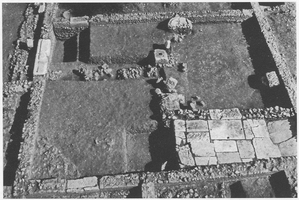 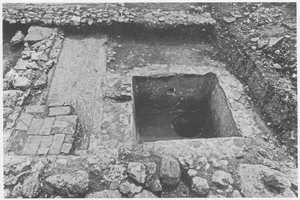 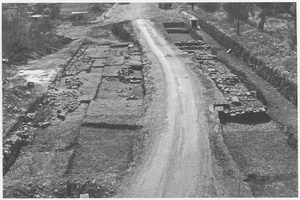