Key-words
Painting - Tools/weapons - Numismatics - Figurine - Tomb - Dress and personal ornament - Domestic space
Type of Operation
Excavation - Research excavation
Institution
ASA
Toponym
Mycènes, Mykines, Mykinai, Mycena, Mycenae
Linked Record
19881988 (1)19891989 (1)20002002200420062007200820092010201120122013
Report
Mycenae. Excavations continued under the direction of S. Iakovidis (ASA) at the Petsas House and the East House.
At the Petsas House (Fig. 1), use of a 1m deep, square pit with a low stone wall at its edge was dated to the Archaic and Classical periods by Archaic tiles and black-figure and Corinthian ceramics. The pit was abandoned during the fourth century BC.
Two deep bothroi dug between Mycenaean walls were filled with refuse including post-Mycenaean sherds, tiles and round pebbles. A square structure (Room Φ) was also revealed, but with no evidence to indicate its use except some fragmentary proto-Φ figurines and a round carving on the floor.
Room Δ was fully excavated: the southeast corner was occupied by one of the Hellenistic bothroi. A wall ran across the west section of the room, while the east section was excavated to bedrock yielding early Mycenaean sherds, some figurines, and a few stone tools.
An irregular series of post holes were found following the cleaning of Room Π, as well as quartz and obsidian tools, and remains of pigments.
Room Τ was completely excavated and its south wall identified (but not the west). A hard-packed surface above the natural rock belongs to an older phase of use of this area. Towards the east, the bedrock had a series of square and round cuttings of unclear purpose, while the area around it was filled with sherds, fragments of human and animal figurines, and small fragments of wall painting.
Room Η was filled with destruction debris from the upper parts of the building, including large scattered pot sherds. The fill contained figurines, a zoomorphic rhyton, and fragments of wall painting: its removal revealed the walls of a room which were not fully excavated.
Finds include mostly sherds, 16 complete vessels, many fragments of wall painting (Figs 2-3), figurines (especially early types), bone tools (Fig. 4), and ceramics of historical periods. All the areas completely excavated in 1950-1951 were cleaned. Excavation north of Room Δ clarified the plan of the Petsas complex and revealed the existence of another structure to the northeast. Finds confirmed that the Petsas House was used for storage and perhaps the making of pottery and figurines, until it was violently destroyed in Late Helladic IIIA2. The complex was inhabited through the Archaic and Hellenistic periods.
In the East House (Fig. 5), the north continuation of Wall I was identified. West of Wall I, the rectangular room (Fig. 6) contained Hellenistic fills and constructions reaching almost to bedrock, with Mycenaean architectural remains mostly destroyed. The Hellenistic fill covered almost all the house in one loose layer, and lay over a solid fill dating to LH IIIC Middle on the levelled bedrock. Mycenaean architectural remains were probably destroyed in Hellenistic times.
Investigation in the area between walls Σ, Ρ, and the trimmed bedrock towards the west revealed the existence of undisturbed Mycenaean fills and architectural remains. Mycenaean building activity in the area probably ended in catastrophe, with the collapse of walls and the formation of a stone pile which was not disturbed again until the Hellenistic period.
Excavation east of the South Room revealed the remains of three circular cuttings in the rock, and a rectangular cavity in the northeast corner (Fig. 7). Wall Κ/Υ was founded in Hellenistic fills upon Mycenaean wall Η. Two Middle Geometric tombs were cut into the Mycenaean fill in the east part of the South Room. Tomb 1 was the contracted inhumation of a child in a simple pit, accompanied by a pot and a bronze ring. Tomb 2 is a built cist tomb with a contracted inhumation accompanied by seven pots, three bronze rings, and an iron dagger. From the upper fills in the area came a bronze ring and a silver coin of the beginning of the sixth century (570 BC) minted by Aegina.
The whole area of the South Room was in use in the late Mycenaean period, the rectangular cavity linked probably with water collection or some other outdoor industrial activity.
Author
Robert PITT
Bibliographic reference(s)
Ergon (2012), 22-29.
Date of creation
2013-06-17 00:00:00
Last modification
2021-03-02 20:28:00
Picture(s) 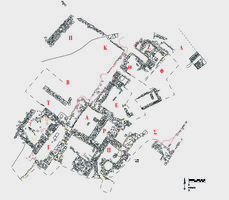 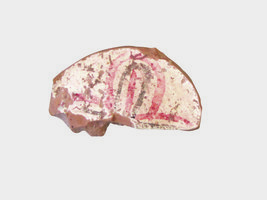 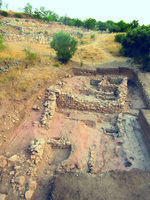 Fig. 6/ Mycenae. The rectangular room in the East House. 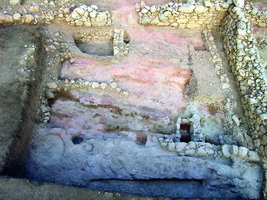