Key-words
Production/extraction site - Numismatics - Lamp - Hearth/Kiln/Oven - Figurine - Site Type - Find Type
Type of Operation
Excavation - Rescue excavation
Institution
Η’ ΕΠΚΑ
Toponym
Corfou, Corcyra, Corfu, Korfu, Kerkyra
Linked Record
2001
Report
Figareto, Kanoni. Bouzi property. J. Provata (Η’ ΕΠΚΑ) reports on excavation 115m east of the Chalikiopoulou lagoon (the site of the Hyllaian Harbour) and 90m from the Mikalef property, where an extensive potter’s workshop had previously been discovered. Excavation focused in the north part of the plot, revealing a room (A) with a slightly raised, Π-shaped floor of pebble, tile and cement, two water channels (one of tile and the other, a terracotta pipe, leading to a well), and an entrance with steps to it on both sides. To the west of the room was an exterior court with a further tile-lined channel leading to a kiln. Finds mostly comprise amphora sherds, lamps, skyphoi, Megarian bows and figurines. Black-glaze sherds were also found, plus a few red-figure, frying pans, and mould fragments, pot stands, and a scarab seal of turquoise. Sixty-four bronze coins were found, mostly Hellenistic, and a Kerkyraian silver stater of 500-450 BC.
Four building phases were identified:
The Late Archaic first phase comprises the west part of wall 1 (the common south wall of the room and courtyard), the west wall (7) with the steps, the well, and probably also wall 8.
The second phase (ca 500-540 BC) saw the layout of the courtyard (the extension of wall 1 and the construction of walls 5 and 9) and the construction of the kiln and channel. During this phase a potter’s workshop operated in this area.
The third phase (from ca 450 until the end of the Hellenistic period) saw the destruction of the kiln for the extension of wall 5 to create room A. The workshop thus went out of use.
The final, Roman, phase is represented by the remaining walls on site and by pottery (notably frying pans).
Author
Catherine MORGAN
Bibliographic reference(s)
ADelt 56-59 (2001-2004) B5, 206-208.
Date of creation
2013-06-14 00:00:00
Last modification
2018-08-22 09:24:40
Picture(s) 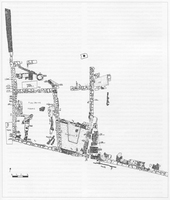