Key-words
Public building - Temple - Theatre - Inscription - Sculpture - Religious building - Entertainment venue - Commercial area - Public area - Cemetery - Sanctuary
Type of Operation
Excavation - Research excavation
Institution
Archaeological Society of Athens
Toponym
Messini (ancient), Messène antique
Linked Record
19931995199719981999200020022004200620072008 (1)20082009 (1)20092010 (1)20102011201220132014201520162017201820192020
Report
Messene. P. Themelis (ASA) reports on excavation in several parts of the site (Fig. 1).
In the theatre, a large number of EByz graves containing no offerings were uncovered in front of the E and especially the W parodoi. In the latter case, graves were lined with blocks from the superstructure of the parodos, most of which had builders’ marks (Gr characters denoting course and position). Graves in the E parodos were usually built of limestone blocks, notably the geison blocks of a Doric stoa, the location of which is not yet known. The channel round the orchestra was cleaned and work undertaken to drain the orchestra and proskenion. Fragments belonging to 2 surviving stone thrones were collected, and surviving elements from the steps and stairways of the koilon put in order.
The 2 body sections of the 2nd Ct BC marble statue of large Herculaneum type, found in the E apse of the proskenion, were joined and the statue set on a stone base. The missing head probably represented Claudia Frontina, wife of Claudius Hostilius Caelianus and mother of Tiberius Claudius Sathidas Caelianus I, who was Helladarches of the Achaian League and chief priest of the Sebasteion during the reign of Trajan. The torso of Hermes from the proskenion was also set on a base.
The theatre basilica and surrounding area were landscaped. One of the fallen columns from the S colonnade was re-erected. One of the stylobate blocks of the S colonnade is an inscribed statue base of the M2nd Ct AD, in honour of the chief priest of the Sebasteion, Tiberius Claudius Geminianus, son of Claudius Crispianus and Aufidia Gemina. His statue was erected by Claudius Aristomenes, priest of Zeus Ithomatas, and Claudius Nikeratos, grammateus of the Synedrion, both members of known families in Messene. Tombs were discovered along the S side of the basilica and outside the apse. One of the cover slabs bears a 2nd Ct BC inscription on both sides setting out the boundaries of an unknown region.
Excavation of the NE corner of the N stoa in the agora revealed 2 stone measuring tables for solid substances (Fig. 2), as well as orthostats on which the table tops were set. On the lower face of the table slabs, around the flow hole, were metal clamps and pegs. Among other finds from the fill between the tables and the E wall of the stoa was a cast bronze Hel head of Medusa from the fulcrum of a couch. During cleaning and landscaping of the temple of Messene, numerous fragments of inscribed limestone were discovered, from 2 decrees. The first concerns the giving of honours to Messenian judges by the Thessalians. The 2nd, of the 1st Ct BC, records the honour paid to the Messenian Archidamos Philostratou as proxenos and benefactor by the polis of the Pylians. The stele with the decree was to stand in the Sanctuary of Athena Koryphasias at Pylos, with an exact copy in the homeland of the honorand, in accordance with the customs of the ancients, and probably in the sanctuary of the goddess Messene, where the stele was in fact found. It is the only stele so far found from the city of Pylos, which was also named Koryphasion. The Doric stoa, discovered long ago close to the W side of the temple of Messene, is the prostoa of a broad-fronted building, the function of which is still unknown. W of the Doric prostoa, 2 entrances, with large stone thresholds, lead to 2 chambers. Left and right of the thresholds were large limestone bases for inscribed stelae. Probably the building belonged to some city authority. A destruction level of tile from the roof covered the floor of the rooms: in certain places, especially in the SE corner of the N room, there were strong traces of fire. This occurred before the 3rd quarter of the 4th Ct AD (according to the ceramic and numismatic evidence), probably due to the catastrophic earthquake of 375 AD which caused the destruction of many public and private buildings at Messene.
N of the temple of Messene, a square hypostyle hall was investigated, the N edge of which lay under deep fill; along the length of the front face was a roofed prothalamos. Inside the hall were the foundations of 2 parallel rows of bases (8 along the long sides, 4 on the short). The building is identified with the bouleion referred to in the inscription recording the boundary dispute between Messene and Megalopolis inscribed on the adjacent Base of the Knights.
Ch tombs with no grave goods were found in several places inside the bouleion and out. Digging associated with their construction was largely responsible for the destruction of the building’s superstructure.
Reconstruction continued with support from the Third Community Framework: work was completed in the stadium, the gymnasium stoa and the E stoa in the gymnasium, and in the heroon-mausoleum of the Saithidai S of the stadium.
E.-A. Chlepa reports on restoration and reconstruction work undertaken at the Arcadian Gate.
Author
Catherine MORGAN
Bibliographic reference(s)
Ergon (2007) 42−59. E.-A. Chlepa, Πρακτικα του Ζ' Διεθνους Συνεδριου Πελοποννησιακων Σπουδων 2 (Athens 2006) 287-304
Date of creation
2009-12-01 00:00:00
Last modification
2021-05-24 21:23:21
Picture(s) 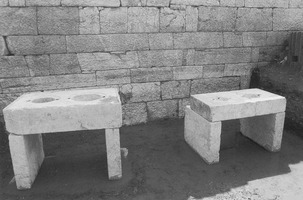