Key-words
Public building - Hearth/Kiln/Oven - Inscription - Numismatics - Metal - Glass - Sanctuary
Type of Operation
Excavation - Research excavation
Institution
ΙΒ' ΕΠΚΑ
Toponym
Dodone, Dodoni (sanctuaire)
Linked Record
1997199819992000200220042004 (1)2005
Report
Dodona, sanctuary of Zeus. K. Zachos (ΙΒ' ΕΠΚΑ) reports on geophysical survey which revealed evidence of dense construction south of the south extension of the stadium, at a depth of 2m, as well as the continuation of the orchestra drain which probably connects with the other channels which drained the orchestra and the stadium into the Karstic fissures beneath the skene floor. South of the skene and the eastern retaining wall of the theatre, architectural remains may be identified with the Sacred Way which led from the theatre and stadium to the area of the temple.
Excavation south of Building M (the Priests’ House), at the level of the east retaining tower of the theatre revealed a 12m-long section of the west part of the Hellenistic peribolos of the shrine, in isodomic masonry preserved to a maximum of two courses. The line of the peribolos in this area was altered at the start of the third century to include the bouleuterion and the prytaneion. At the northwest, the peribolos merges into the facing of the south wall of Building M, which remained in use until the Aitolian sack of 219 BC. This facing was added in an attempt to harmonise the rougher masonry of the building with the monumental theatre retaining wall, and to create a continuous façade between the theatre and the bouleuterion. The wall also served as a retaining wall for the dumped debris of the Aitolian sack. The west monumental entrance to the shrine lay at the junction between the peribolos and the facing wall: two pilasters bordered two monolithic threshold blocks in secondary use. The Sacred Way (a paved street) began from this point, with patches of the road bed preserved between the entrance and the bouleuterion. The first phase of the Sacred Way was contemporary with the first peribolos. When the peribolos was moved further west, the Sacred Way was extended with a new road bed following the natural contours.
Excavation between walls 1 and 7 produced, from the upper levels, tiles with wavy finger-grooves, brick-tile, plain domestic pottery and two bronze coins of Constantine I and Constantine II. The disturbed lower strata contained, alongside black-glaze pottery, prehistoric handmade coarseware with plastic rope and disc decoration, finer grey burnished ware, and a kylix stem with band decoration (likely a local imitation). In the east part of the area at the level of the bouleuterion stoa, the continuation of wall 1 produced the same mixture of material, plus a bronze dagger. South of this wall lay the bed of the Sacred Way. Finds here include part of a second-century BC floral, brick-tile, glass vessels and Late Roman domestic plainware. A rectangular stone structure aligned with the Sacred Way may belong to a flight of steps linking the lower level of the sanctuary with the bouleuterion and prytaneion above. Finds from this area include a seventh-century cast bronze griffin probably from a lebes (likely debris of the Aitolian sack), large bricks with white plaster, part of a tile stamped ΕΠΙ ΦΟΡ[ΜΙΣΚΟΥ], and plain domestic pottery.
In the area of the continuation of wall 7 (wall 11), a Late Roman water channel was founded in a layer containing finger-decorated tiles, brick-tile with incised X, and 12 bronze coins of Constantine I and Constantine II. Around it were sections of terracotta pipe from the drainage system which postdates the Roman sack of 167BC, and from the later, Byzantine system.
In the southern part of the plot two Late Roman rooms I and 9 were covered in a thick layer of stone from the collapsed dry stone superstructure, including spolia from the Hellenistic peribolos and southeast theatre tower. The destruction of these structures is linked to the earthquake of 522-528AD described by Proskopios Peri Ktismaton 4.1.40. Finds include large quantities of roof tile with circular finger decoration, brick-tile, storage and cooking vessels, basins, plates drinking vessels and other forms of domestic pottery, bases of fine wine-glasses and deep glass bowls of the third to fifth century AD.
In the eastern part of the area a long, poorly built wall supported at the northern end a rectangular kiln, preserving part of the eschara. The destruction level of the eschara area contained tile fragments, a few sherds of plain domestic pottery and many braziers.
Author
Catherine MORGAN
Bibliographic reference(s)
ADelt 56-59 (2001-2004) B5, 105-110.
Date of creation
2013-06-10 00:00:00
Last modification
2021-08-10 08:22:58
Picture(s) 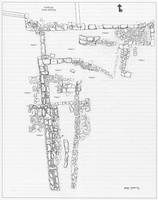 Fig. 1/ Dodona, sanctuary of Zeus, plan of the Priests' House. 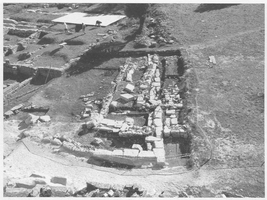