Key-words
Agricultural facility - Residence - Building Type
Type of Operation
Excavation - Rescue excavation
Institution
ΙΒ' ΕΠΚΑ
Toponym
Kalligonio
Linked Record
200020012002
Report
Leukas, Megali Vrysi (A. Lazari property). G. Pliakou (ΙΒ' ΕΠΚΑ) reports on continued excavation of a Roman farmstead (Fig. 1: 2). The complex was in two parts: the main wing with a series of four rooms in the northeast of the building, with the greater part likely extending further east into the neighbouring plot. Northwest of this main residential area were the adjunct rooms arranged in four long wings, the central of which was an access corridor. Wing A, immediately north of the corridor, contained six rooms. Wing B, to the north of A, was only partly explored, revealing four rooms: this wing was likely a later addition to the complex, and as preserved does not communicate with wing A. In wing Γ, south of the corridor, just one dividing wall and part of a cement floor were uncovered. Four column bases were found evenly spaced along a rectangular base, by the wall which divides the south wing from the corridor. It is thus possible that the south wing was originally a form of stoa. Outside the building, to the west were one rectangular and two round structures which likely served some domestic or workshop function.
At least three construction phases are documented across the complex. The first, late Classical-Hellenistic phase is seen in two walls in the north part of the building. In Roman times, at the end of the first century BC, the extensive farmstead was founded, and was then rebuilt with no evidence of abandonment after a partial destruction of the early Roman building. During this phase (early in the second century AD), the building was laid out in its fullest form, with thereafter just a few fragmentary walls in the southwest part of the building, which do not connect, indicating a Late Roman construction phase.
Author
Catherine MORGAN
Bibliographic reference(s)
ADelt 56-59 (2001-2004) B5, 67-70.
Date of creation
2013-06-10 00:00:00
Last modification
2018-08-22 09:24:39
Picture(s) 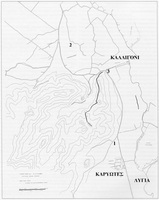