Key-words
Figurine - Hearth/Kiln/Oven - Inscription - Numismatics - Metal - Domestic space - Find Type - Material Type - Site Type
Type of Operation
Excavation - Rescue excavation
Institution
ΙΒ’ ΕΠΚΑ
Toponym
Arta
Linked Record
2001
Report
Arta (anc. Ambracia), Kyprou Street (Gorgoli property). Th. Kontogianni (ΙΒ’ ΕΠΚΑ) reports the discovery of an 8.9m-long section of road running northwest-southeast, with a sandstone-paved pedestrian pavement and part of a house extending along its east side. The road extended to the north, following the natural contours of the hill of Agia Theodora. The external, street wall of the house is preserved, along with sections of dividing walls from at least two rooms: slight modifications were made to the space through the life of the building from early Classical to Hellenistic times. A water channel of limestone slabs found inside the building led out to the street: it was put out of use by the insertion of a new threshold block. Part of an early Classical pebble floor was preserved north of the channel: the south part of this lay on stereo while the north was founded on an area of Late Archaic paved floor (limestone slabs of unequal size laid between levelled areas of bedrock). A two-chambered kiln, badly damaged by recent construction, probably belonged to the Classical phase of the house. The northern of the two round chambers was excavated: the upper part is built of tile and clay, masses of fired clay were found inside, and at the junction of the two chambers a small wall of limestone blocks likely supported the (now lost) eschara. Byzantine and post-Byzantine activity disturbed the northern part of the plot in particular.
Finds include a large quantity of Late Archaic and Classical pottery, plus Hellenistic and later plain and black-glazed wares. Corinthian-style antefixes decorated with meanders and anthemia, and a fragment of a tile with a relief baetyl and the inscription ΠΟΛΙΟΣ were found, plus a few figurine fragments (females, birds and animals) from the kiln area. Bronze coins, mostly Hellenistic issues of Ambracia, and small metal objects were also found.
Author
Catherine MORGAN
Bibliographic reference(s)
ADelt 56-59 (2001-2004) B5, 17-18.
Date of creation
2013-06-10 00:00:00
Last modification
2018-08-22 09:24:39
Picture(s) 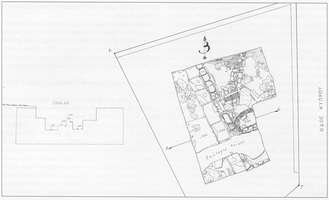 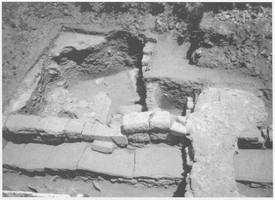 Fig. 2/ Arta, Kyprou Street. General view of the excavation from the west.