Toponym
Kato Lousoi, Kato Soudena, Soudena Ag. Vasileiou (156/1928)
Linked Record
19891995199719981999200020022004200620072008
Report
Lousoi. G. Ladstätter (Director, Austrian Institute) reports further examination of the cult building on terrace I and of the peripteral temple.
On terrace I, W of the peripteral temple, the following sequence of cult buildings is visible following excavation from 2004 onwards. First, the foundations of a simple rectangular building (5 x 7m) of LCl date; a hoard of terracotta figurines (found in 2005) indicates a cult function. Above this oikos, a rectangular building, subdivided into 2 rooms (5.7 x 8.1m), was erected in the Hel period; its E access and some limestone orthostats from its superstructure survive. Deposits of lamps and balsamaria (located in 2004) indicate that this structure also served a cult purpose. Probably in the LHel period, this structure was extended with the addition of symmetrically placed halls in use at least until the E2nd Ct AD.
In 2007, an altar was revealed 2.7m E of the orthostat building, oriented axially towards its entrance (Fig. 1). The rectangular substructure of 6 limestone slabs (2.6 x 1.3m) survives; the upper surface was smoothed and mortises cut into it to facilitate the placing of orthostats. One of this upper level of limestone blocks survives in situ in the NE corner (h. 0.6m). Similarities with the materials and techniques used in the orthostat building and the stoa NW of terrace I suggest a Hel date for the altar. The exact orientation towards the orthostat building further indicates a cult ensemble combining that structure and the stone altar to its E. The surroundings of the altar contained relocated fills with anc. disturbances, with finds of occasionally Ar date, but mostly Cl, Hel and Rom dates.
A sounding NE of the structures revealed the rubble foundation of the N hall of later date, also foundations of the Hel orthostat building cut into a fill containing sherds of numerous Geo and Ar thin-walled drinking cups. Numerous Cl, Hel and ERom sherds indicate continuity of intensive eating and drinking (feasting) in the context of this building, suggesting a cult that preceded the LCl oikos and went back to the Geo period. It could be a local heroon.
In the area of the Hel peripteral temple, work concentrated on the W area of the E hall in the sekos. In conjunction with previous excavation results, the following architectural phases can now be proposed. The temple (Fig. 2), erected in the EHel period, had a peristasis of 6 x 15 columns (15.8 x 42.35m) and a sekos subdivided into a pronaos, an elongated E cella hall (15 x 8m), a square W cella hall (7.8 x 8m), and a transverse room (adyton) to the W (2.8 x 8m). The E cella hall was subdivided into 3 aisles by 3 pairs of interior supports, indicated by 6 individual footings, and in the NE by one limestone slab as bedding for a wooden pillar. This hall was paved with a well-preserved floor of clay slabs.
The building was radically redesigned, probably in the LHel period. The E cella hall was subdivided by a N−S wall. Its E part was transformed into a new pronaos and the W part remained a cult space, now divided into 3 aisles by 4 secondary internal supports, located in accordance with the room’s new proportions. In the course of these modifications, the clay slab floor was partially removed, as were 5 of the 6 limestone bedding slabs for the original internal supports. The base of a cult statue, placed axially in front of the W wall, belongs to this modification. The same almost certainly applies to the 6 internal supports in the W cella hall. The surroundings of the cult statue base contained numerous LHel and E Imperial clay lamps from the period of the temple’s use, as well as secondary deposits of older cult objects, including a LAr iron sword and a Cl bronze sauroter.
Soundings beyond floor level in the E cella hall in 2006 provided information about the pre-Hel use of the temple area. The terrain, sloping down to the N, was subdivided into terraces by E−W running support walls, of which rubble foundations survive at varying elevations. Associated with these walls were use deposits and fills above the preserved wall tops, containing finds such as sherds of Ar drinking cups and cooking pots, bones, ashes and burnt clay.
Thus the area was used for meals or feasting from the Ar period onwards, before the erection of the temple. A cult of the same duration is indicated by the secondary deposits in the area of the cult statue base. Fragments of an Ar Laconian clay roof suggest an older cult building, probably located S of the Hel temple. It can therefore be assumed that the Hel cult is intentionally connected with an older cult, the origins of which lie in the Ar period at the latest. Overall, the excavations suggest that the extra-urban Sanctuary of Artemis is complemented by an urban sanctuary, with its own distinctive, but so far unidentified, cult from the Ar until the E Imperial Rom period.
Author
Catherine MORGAN
Bibliographic reference(s)
Unpublished field report, Österreichisches Archäologisches Institut
Date of creation
2009-12-01 00:00:00
Last modification
2022-04-05 10:57:42
Picture(s) 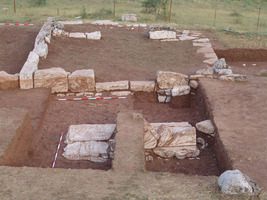 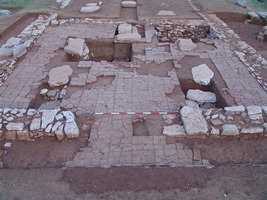