Key-words
Domestic space - Public area - Stone - Architectural terracotta - Architectural revetments - Residence - Public building
Type of Operation
Excavation - Research excavation
Institution
École française d’Athènes
Toponym
Argos
Linked Record
2005200620072007 (1)200920102010 (1)2010 (2)2010 (3)201120122015
Report
Argos, Aspis. G. Touchais (EfA/Paris 1) and A. Philippa-Touchais (EfA) report on the 2007 season of excavation and study.
Cleaning of the E sector of W. Vollgraff’s excavations was completed (Fig. 1), revealing the spatial organization of this part of the MH settlement. The settlement was organized in 2 successive terraces: the houses of the lower terrace, built along the peribolos, are oriented N−S following the contours of the hill, whereas those of the upper terrace are perpendicular to the peribolos, conditioned by the morphology of the rock. The discovery of 3 MH graves in situ (Fig. 2), all pre-dating the final phase of habitation, proves the presence of intramural burials in this sector.
Study of material from previous excavations continued. The presence of storage vessels, at least in the N sector, strengthens the hypothesis of functional differentiation between a N sector dedicated to domestic and craft activities and a SE sector where a high frequency of drinking vessels indicates more social practices. A preliminary inventory of all non-ceramic finds had been made: the majority of the ca. 1,500 objects are MH in date, but there are also a number of Ar, Cl and Hel items. Finally, the topographic plan has been augmented. Three 3-D views give an impression of the MH site as seen from the plain. They demonstrate that the concentric organization of the settlement, especially in its final phase, created the impression of fortification, and thus heightened its prestige.
Author
Catherine MORGAN
Bibliographic reference(s)
Unpublished field report, École française d’Athènes Also:
A. Philippa-Touchais, G. Touchais et al., L'Aspis, BCH 132.2 (2008), p. 767-785.
Date of creation
2009-12-01 00:00:00
Last modification
2020-03-30 14:58:18
Picture(s) 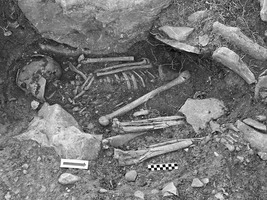