Toponym
Sision, Kato Sisi
Linked Record
2007200820092010201120152016201720182019
Report
Sisi. J. Driessen (Belgian School/UC Louvain) reports on the fifth excavation season in 2011, which concludes the first programme of field-work.
Successive deposits were made in the house tombs of the Pre- and Protopalatial cemetery (Zone 1) throughout EM and MM II. In MM IIB, ritual was practised around and on top of earlier building remains in the area.
In the west part of the cemetery, further work was undertaken on the large burial structure (9.1–2) explored in 2010 (when eight individuals were found in space 9.1). The structure was shown to extend further to the west and south. Three partly articulated perinatal skeletons were recovered from lower levels. Three phases of deposition were identified in space 9.2. First, an adult was buried in a terracotta larnax against the south wall of the compartment. One side of the larnax then collapsed and was used as a surface on which an adult, an infant and a child were deposited. The level was then sealed. Secondly, six individuals were deposited in contracted position. On the skull of one, set against the north wall, a small gold earring and close by a tiny gold pin and an agate bead. After another sealing layer, four babies and two adults, all more or less articulated, were buried in an area against the south wall prepared with stones.
Above the west room (9.3), a layer contained cups set upside down; in a higher, disturbed level (9.4) was a fine white marble sealstone (petschaft).
On the summit, exploration of the Postpalatial floor levels of Building CDE (Zones 3–5) was completed (Fig. 1). During LM IIIA-B, the architectural remains on the summit probably formed a single complex arguably constructed in LM IIIA2, partly reusing the ruins of a Neopalatial building destroyed in LM IB. After a first destruction of Building E by fire, early in LM IIIB, the south wing was abandoned. Some rooms of Building CD may also have been abandoned at this time, since they had been blocked before the final destruction. A further destruction in LM IIIB created a series of deposits: on the floor of room 3.6 were a deposit of stone tools (including a fine pestle) and two nests of over 50 terracotta spools (items rare on Crete before LM). Room 4.15 was packed with pottery, including at least five pithoi, stirrup jars, a few small cups and a juglet, a Chaniot stirrup jar as well as a small hut model (Fig. 2). At its north wall was a fire place next to a round cooking plate. While forming an architectural unity with Building CD, this room only connects with the court to the south. Tests outside Building CD yielded fragmentary horns of consecration in plaster-coated stone, and a terracotta label in what may be Linear B.
No further Postpalatial architecture was discovered on the south side of the summit (Zone 5). All architectural remains here belong to earlier, especially Protopalatial, phases, and are characterized by plastered walls and floors. During Late Minoan I–III a large open space, partly paved with pebbles, lay between Building CD (Zones 3 and 4) and Building E proper. Earlier architecture, associated with EM III/MMIA pottery on a red clay floor, was cut through in the construction of Building CD.
In the southeast part of the summit (Zone 6), the long-lived Building F spanned at least Proto- to Postpalatial times, although only a few LM IIIA2 and LM IIIB floor deposits were preserved. The different façades of the building were traced. At its southwest angle a thick MM IIIB/LM IA deposit contained many complete conical cups, ledge-rim cups (some painted), amphora and rhyton fragments, and a round-bottom rhyton painted with spirals and tortoise shell ripple. The west façade runs north-south for over 20m: a carefully constructed krepidoma of sideropetra slabs would have supported the ammouda ashlar facade, fragments of which lay in front of it to the west. To the northwest a fairly broad wall, at least 10m long, formed angles with the façade of Building F to the east and with an ammouda ashlar wall to the west. Against the north wall of Building F was a bench with a series of artificial hollows in the top.
In between these different façades were traces of a court paved with blue pebbles set in clay and occasionally lime. This court was found both to the south and the north of Building F, spanning the entire façade (it is ca. 10.5m wide and at least 22m long). A few, primarily Neopalatial, sherds were found immediately on top of and below this court.
In surface layers to the west of the ammouda ashlar wall, some six terracotta figurine fragments (including two horses) are the first clear evidence of Postminoan use of the Bouffos hill.
Author
Don EVELY
Bibliographic reference(s)
Unpublished field report, Belgian School at Athens (J. Driessen).
Date of creation
2012-09-25 00:00:00
Last modification
2018-08-22 09:24:38
Picture(s) 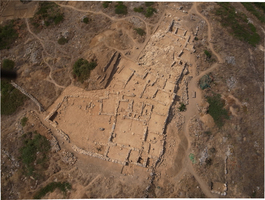 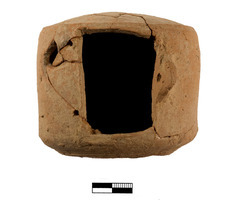