Toponym
Kenchreai
Linked Record
2006200720082009201020112013
Report
Kenchreai, Koutsongila ridge. E. Korka (Ministry of Culture), J. Rife (ASCSA/Macalester College) and P. Kasimi (ΛΖ' ΕΠΚΑ) report on excavation, study and conservation on the Koutsongila ridge, N of the anc. harbour (Fig. 1). Excavation concentrated in 3 major areas (A, B, C, Fig. 2).
In 2004, geophysical survey in area A (at the S end of the ridge overlooking the harbour) had revealed a large rectangular enclosure: monumental blocks remain on the surface. Excavation revealed a N−S wall facing onto a deep, wide depression in the bedrock. It is as yet uncertain whether this created a terrace or delimited space in a more significant way. A cremation pyre was also discovered in area A: a small, elliptical depression contained ash with burned cobbles, bones and nails, presumably from a coffin or bier. The human bones, mixed with a few animal bones (perhaps sacrificial victims), show extreme changes typical of prolonged exposure to temperatures exceeding 800 °C. An ERom basin and amphora deposited near the pyre may have been used for drink offerings or fuel. To the NE, a rectangular building was apparently used for burial: the fill contained numerous bones and LRom lamps. Next to it were 3 5th−7th Ct AD cist graves cut into bedrock: one was looted, but the others contained numerous bodies buried over a long period. Eight lead tablets bearing geometric and floral designs and rolled into tubes had been left at the top of one of the cists.
In area B (along the ridge’s E cliff), structural remains have long been visible on the surface. Excavation revealed a mod. (20th Ct) circular structure, probably a Second World War turret, directly overlying a well-preserved mosaic floor of the E2nd−M3rd Ct AD (Fig. 3), which was partially uncovered in 2007. The design is conventional: a field with a diagonal grid surrounds bands of wave crests, diamonds, guilloche and cubic patterns, all framing an emblema depicting an enwreathed head of Silenus looking left. The mosaic displays several colours, and the stone and glass tesserae inside the figural panel are very intricate. It represents the Hel, or eastern, style of mosaic art of the period: there are close contemporary parallels in Asia Minor and the Corinthia (the Kokkinovrysi villa W of anc. Corinth). It likely belonged to an opulent seaside villa, though its proximity to the cemetery is noteworthy. In addition, another building, likely an ERom house, was found ca. 36m S along the cliff. The presence of these structures in the SE corner of the ridge suggests that the lavish complex at the base of the N mole of the harbour extended up onto the ridge. Such buildings may comprise a wealthy residential quarter.
In area C (the cemetery), excavation around tomb 10 uncovered a building above the dromos which had apparently suffered a catastrophic collapse (Fig. 4). A niche in the W wall might have contained an epitaph or artefacts such as lamps or a sculpture. Only 2 isolated burials (graves 51−52) were found between tombs 10 and 7. Here commemorative rituals, such as dining, were apparently performed either in the home or inside the tomb. Inside tomb 7 were discrete deposits of objects associated with funerary rituals of the 1st−3rd Ct: lamps, figurines, unguentaria, cinerary urns, Knidian bowls, cups in thin-walled ware, amphorae and frying pans. Wof tombs 3 and 23, 5 wheel ruts running N−S constitute 2 or 3 cart roads used over a long period during the Rom Empire. This was perhaps the main route into the harbour from the N as travelled by Pausanias. To the SW, a substantial building, with walls in opus testaceum on an ashlar socle, served (until its collapse around the 120s AD) as an above-ground chamber tomb with a rock-cut cist (grave 50) along the N wall. Sixteen cist graves of the 5th−7th Ct were dug into the bedrock here: all had the typical form of a vertical shaft opening W into a wider compartment. Many had been partly looted, but some were undisturbed: the mortar and slab covering and epitaph of grave 43 were intact (Fig. 5). The epitaph, inscribed on a bluish-gray schistose marble plaque, reads: + κυμητίρι<o>ν δι/αφέροντα Ἀνδρέα/ τῶ ὐι(ῷ) τοῦ Κορω/νέου+ (‘+ The burial belonging / to Andrew / the son of / Koroneos +’). These graves, as those in area A contained numerous bodies interred over a long period in a supine, extended position, with heads to the W. They occasionally included such artefacts as lamps (Fig. 6), pitchers and lekythoi, bronze rings, crosses and buckles.
Study of artefactual and skeletal remains and of the natural environment of the ridge continued. M. Morison examined numerous artefacts, including over 19,000 sherds. R. Weir identified the 50 coins and bracteates so far discovered on the ridge. D. Ubelaker continued his study of the human bones, and S. Garvie-Lok sampled bone for chemical analysis in connection with the study of anc. diet. R. Nunes Pedroso collected samples of mortar and painted plaster. Finally, R. Dunn examined the geological conditions of the tombs to understand taphonomy. On site, conservation of the chamber tombs and their plaster was begun.
Author
Catherine MORGAN
Bibliographic reference(s)
Unpublished field report, ASCSA
Date of creation
2009-12-01 00:00:00
Last modification
2021-07-29 14:00:31
Picture(s) 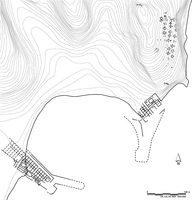 Fig. 1/ Fig.1. Kenchreai: plan of harbour and Koutsongila ridge to the NE. 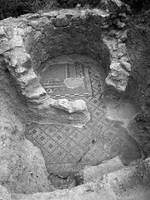 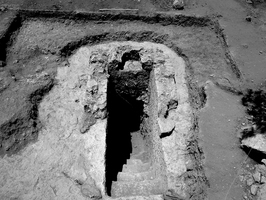 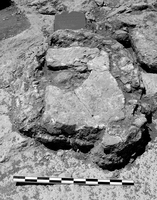 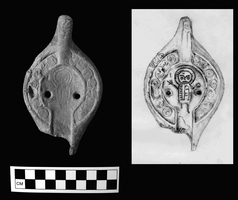