Key-words
Type of Operation
Survey
Institution
BSA
Toponym
Cythère, Kythira, Kithira, Kythera, Tsirigo
Linked Record
19992000200220042004 (1)200620072008201020112014
Report
Kythera Island Project. E. Kiriatzi (BSA) and C. Broodbank (BSA/London) report on the penultimate study season in 2011. A total of some 36,000 feature sherds of all periods have now been individually recorded from site collections and tract-walking, permitting a near final overview of site numbers per period (fig. 1).
In prehistory, scattered evidence for Late Neolithic activity (mainly based on lithics) is followed by sporadic light concentrations of Final Neolithic-Early Bronze Age I pottery. A much clearer settlement pattern is discerned in Early Bronze Age II: this is contemporary with, and followed by, a number of First Minoanising scatters with an obvious coastal emphasis (fig. 2), although precise resolution for the late third-early second millennia BC (the First Minoanising and First Palace periods) requires further study. The boom in the Second Palace period is remarkable, with an obvious shrinkage in the number of concentrations in the Third Palace period. Thereafter, tiny totals for the Post-palatial to Protogeometric and Geometric periods have been established over the last few seasons, and the same for Archaic (although figures here may grow slightly as diagnostics are refined). The Classical peak, the second highest in the island’s pre-modern history, should be correlated either with early Spartan domination or with the later phases of Athenian intervention. Hellenistic and Early Roman site totals are again reduced, although those in the coastal zone will grow marginally once the problem of amphora chronology is resolved. But thereafter there is a significant climb through Middle to Late Roman (perhaps as the urban centre on Paliokastro dissolved). (Fig. 3). In Early Byzantine (mainly the late seventh-eighth centuries, with no proof of continuity to Middle Byzantine), settlement levels are comparable with those at the end of the Bronze Age. Middle Byzantine figures are depressed by the difficulty of dating amphora types which extend into Early Venetian: once resolved, site numbers should reach the levels expected for a period of some importance in the island’s history, according to both written sources and church construction and painting. Venetian sites remain to be sub-divided, and it will be important to see how the resulting patterns mesh with demography as known from censuses and with the emergence of the ‘traditional’ settlement pattern still evident today. As an indication of the huge amounts of pottery dispersed in the landscape over the past two centuries, substantial numbers of recent sherds are present at 121 sites, a minority of which have architectural investment in the form of field-houses or other such structures. Alongside this study, petrographic and chemical analysis of pottery fabrics in the Fitch Laboratory has focused on Roman pottery, and especially the cooking vessels used on Kythera.
Author
Catherine MORGAN
Bibliographic reference(s)
Unpublished Report.
Date of creation
2012-07-25 00:00:00
Last modification
2021-03-09 11:12:18
Picture(s) Fig. 1/ Kythera Island Project: over 200 sites of all periods located in the survey. 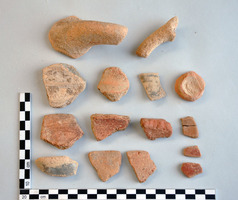 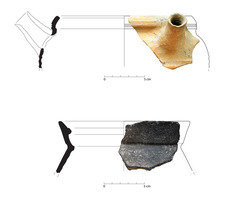