Key-words
Fortifications - Dress and personal ornament - Sanctuary - Building Type - Find Type - Site Type
Type of Operation
Excavation - Research excavation
Institution
6th EBA.
Toponym
Cape Glarentza
Linked Record
20002004
Report
Glarentza. The 6th EBA reports the results of the following excavations conducted between 2000 and 2004.
Clearance work as part of a programme to develop and make publicly accessible the Castle of Glarenzta has given the first overview of the medieval city and its defensive architecture. Features exposed include: the full external fortification circuit; the moat with its single-arched stone bridge (fig. 1), the inner circuit wall and stronghold (fig. 2); sections of the gates and towers; a three-roomed bath; and a sea-side tower founded on a grid of wooden beams. On the wider archaeological site finds include towers, well and the remains of buildings of as yet unknown function. The large quantity of portable finds includes imported pottery and coins from a 15th-century deposit, and a plaque with the arms of the Villehardouin dynasty.
Rescue excavation in the Gothic church of St. Francis was completed (fig. 3). The porch was excavated on the west side, the orthogonal nave completely exposed, with remains of the altar table and side chapels, the steps giving access from the nave to the sanctuary, and the decorated wall dividing the two parts of the church (fig. 4). The medieval building also preserved traces of a later small complex (perhaps a monastery) inside it.
Along the long walls of the church were cist tombs (several with false sarcophagoi) which although robbed produced goods including coins, dress attachments, bronze and iron spurs (fig. 5), fragments of glass and architectural members from the church building (chiefly relief hoops from painted walls fig. 6). More recent pit graves were found under the church floor. Portable finds from the excavation consist mostly of 13th- to 14th-century imported glazed pottery (fig. 7).
Author
Catherine MORGAN
Bibliographic reference(s)
http://www.yppo.gr/0/anaskafes/pdfs/6_EBA.pdf.
Date of creation
2012-07-18 00:00:00
Last modification
2018-08-22 09:24:37
Picture(s) Fig. 1/ Glarentza. Bridge over the moat.

Fig. 2/ Glarentza. The eastern arm of the walls of the fort.

Fig. 3/ Glarentza. The church from the west.

Fig. 5/ Glarentza. Bronze spurs from a grave within the church. 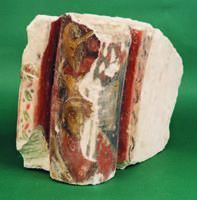