Key-words
Tools/weapons - Plant remains - Metal - Domestic space - Find Type - Material Type - Site Type
Type of Operation
Excavation - Research excavation
Institution
Ζ’ΕΠΚΑ and DAI.
Toponym
Kakovatos
Linked Record
2011
Report
Kakovatos. G. Chatzi-Spiliopoulou (Ζ’ ΕΠΚΑ) and B. Eder (Freiburg/DAI) report on the 2011 excavation season.
It was established that the large building on the hilltop excavated in 2010 (fig. 1) was destroyed by fire in LH IIB. A pit along the south wall contained sherds of an Ephyraean goblet (fig. 2) deposited with other vessels before the final fire. This pit held a large pithos and fed into an overflow channel leading to the southwest of the building. West of the channel, a narrow wall probably formed the western boundary of the building: due to a sharp drop in ground level, the northern boundary remains unclear.
The dismantling of the pebble floor of the building revealed an older use horizon with two small older pebble deposits. A complete bronze double axe (fig. 3) lay under the pebble floor by the east wall.
To the west, excavation revealed three walls forming the southeastern part of a further building, the rest of which had been destroyed by erosion. Within this building was destruction horizon containing three pithoi and several vessels in situ. Intense concentrations of charred figs were found in the soil in and especially around the pithoi (fig. 4).
On the western slopes of the hill, the retaining wall of massive blocks known since Dörpfeld’s time forms a corner at its northern end and continues to the east. Despite intense erosion and deposition of wash in this area, excavation dates the wall construction to LH IIB. The wall probably formed a planned ensemble with the buildings on the plateau above. Poorly preserved stretches of wall north of the retaining wall likely relate to an access ramp to the plateau.
Author
Catherine MORGAN
Bibliographic reference(s)
Unpublished field report, DAI.
Date of creation
2012-07-18 00:00:00
Last modification
2018-08-22 09:24:37
Picture(s) 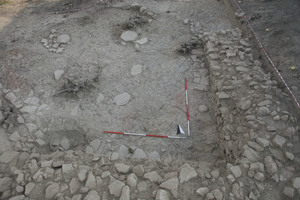 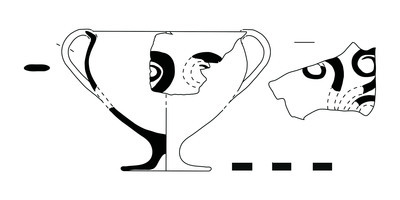 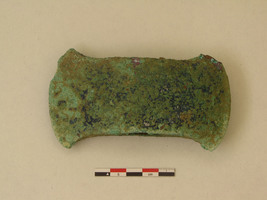 Fig. 3/ Bronze double axe from beneath the pebble floor. 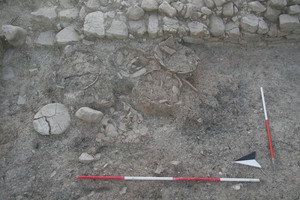 Fig. 4/ Carbonized figs from around the pithoi.