Key-words
Cemetery - Site Type
Type of Operation
Excavation - Rescue excavation
Institution
ΛΖ’ΕΠΚΑ.
Toponym
Korinthos, Corinth
Linked Record
20012004
Report
Ancient Corinth, Anapnoa (Anaploga) (property of A. Papathanasopoulou). V. Tassinos and P. Kassimi (ΛΖ’ ΕΠΚΑ) reports the discovery of a cemetery alongside the road which leads from the centre of the city towards the Phlius Gate. Most graves date to the late fourth and early third century BC.
A funerary monument (5,3 x 3m, 2,4m high) built with large isodomic limestone masonry (fig. 1) contained three chambers of approximately equal size, each holding a single inhumation (tombs 1-3). In chamber 1, a monolithic limestone sarcophagus lay beneath a layer of offerings (a mass of Corinthian terracotta figurines depicting women of different ages in various poses, some placed on the cover slab, and a little bronze sheet). Offerings arrayed around the poorly preserved skeleton include two alabaster pyxides with polychrome decoration, one of which contained cosmetic white lead, bronze pins and a needle, a silver coin, fragments of a chteni shell a small terracotta hydria, bronze and iron sheet, nails, rings, pegs and earrings. These may indicate that the deceased was a young woman. Chamber 2 contained cist grave 2, laid on the beaten earth chamber floor and accompanied by an iron pin. Chamber 3 also contained a limestone sarcophagus with an iron strigil as a grave offerings. The structure was set into a pre-existing deep hollow cut into the rock (perhaps a disused quarry) which was entered via a passageway at the west (the entire cemetery was set within and around this hollow). Part of the peribolos wall was preserved on the west side, also of large limestone blocks. A pebble surface surrounded the monument.
Individual tombs surrounding the tripartite monument include four simple cists (5, 6, 8 and 11), a built cist, (4) a monolithic limestone sarcophagus (7), and a Late Roman tile grave (10). Tomb 4 was covered with two re-used Classical limestone geison blocks and a slab of sandstone: the grave contained iron nails by the feet of the corpse. The irregular oval cist grave 5, cut into a thick layer of stones and pebbles, contained an iron strigil, a skyphos, an egg, a lamp, and a squat lekythos, plus iron nails as those in tomb 4. Remains of a funerary pyre (ash and burnt soil containing sherds of miniature vessels and burnt olive stones over an area of 0.5 x 0.5m) lay between the southeast corner of the funerary monument and the northeast corner of tomb 4. Tombs 6 and 11, cut into the hard pebble fill of the hollow, lay to the east of the funerary monument. In each case the deceased received a skyphos, lekythos, lamp, egg, and iron pin. In tomb 6, iron nails were concentrated round the feet. Tomb 11 was covered with five re-used slabs of different sizes, with patches of earlier plaster, plus two Corinthian cover tiles at the west end. Tomb 8, set in a niche in the north face of the passageway into the hollowed area, contained two terracotta alabastra. Tombs 7 and 9 were east of the passageway. Tomb 7 (a sarcophagus) contained an iron pin placed by the feet of the corpse, while cist grave 9 (which has plastered walls) contained an iron strigil.
The cemetery continued towards the north/northeast, beyond the excavation area. The fill of the hollow contained a large quantity of Geometric and early historical period sherds: a likely connection with extensive local settlement in and around the Potters' Quarter is noted. Geometric and Archaic pottery is also noted in the sub-foundation layer beneath the funerary monument. 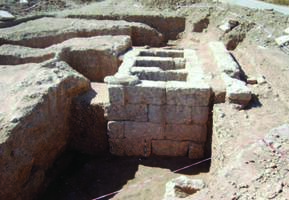 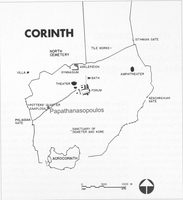 Fig. 2/ Ancient Corinth, Anapnoa, the location of the cemetery in relation to other sites in ancient Corinth. 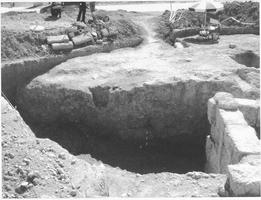 Fig. 6/ Ancient Corinth, Anapnoa, the road from the west and tombs 4 and 5. 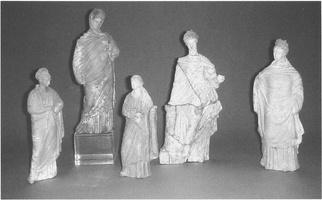 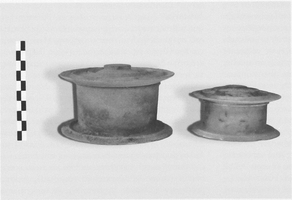 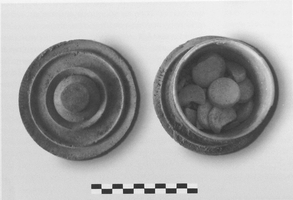