Key-words
Public area - Lamp - Stoa - Road system/waterway
Type of Operation
Excavation - Research excavation
Institution
ASCSA.
Toponym
Agora antique, Athenian Agora
Linked Record
2006200720082008 (1)20092010201120122013201420152016201720182019
Report
Athens, Ancient Agora. J. McK. Camp (ASCSA) reports on the 2011 field season.
Within the Stoa Poikile (Section BH, fig. 1) next to the easternmost interior column, a previously uncovered well (L2: 2), not associated with Middle Byzantine walls above, was excavated to a depth of nearly 7m. In places it was stone-lined, including several pieces of worked limestone and marble, and elsewhere it was lined with tile. More than 100 pots, many (near) intact were largely closed shapes of various sizes, undecorated except for a thin wash or slip (fig. 2). Over 50% were small wheel-ridged pitchers decorated with vertical or oblique gouged lines or occasionally stylized trees. Other shapes included table amphorae, micaceous water jars, and assorted mid-sized storage jars with rounded bottoms, many with wheel-ridged bodies. Several of the larger jars had substantial dipinti in bright red paint on the shoulder, and one gouged pitcher had what seems to be a name incised on its neck. The assemblage is close to the upper layers of Robinson’s Group M (Agora V, plates 29-33) of the fifth and sixth centuries AD. Two lamps were also recovered. One, in non-Attic red clay, depicts on the disc Eros playing a flute. On the base is the name of a well-known fabricant, XIO/NHS, whose workshop was active in the second half of the fourth through the mid-fifth centuries AD (fig. 3). The other lamp, with a plain disc, herringbone rim, and an incised branch on the base, is similar to Agora VII, nos. 2722-2734, of the fifth century AD. In addition to pottery, some two dozen pig mandibles were found (fig. 4), along with pine cones, peach pits, and other organic material.
The well may belong to the late phase of the use of the Stoa, when the colonnades were walled up with rubble to create rooms. This common process is often associated with the appropriation of public buildings for use by private individuals. In this case, troubles caused by the invasion of Alaric and the Visigoths in ca. 396 AD may have weakened public authority over the building, which by this period lay ca. 200m outside the fortified limits of the city. It had already been stripped of its famous paintings by the time of the visit to Athens by the Bishop Synesios in ca. AD 400. There is also some evidence that the Vandals attacked Athens in the third quarter of the fifth century AD, an event which may have hastened the abandonment of the area, the Stoa, and the well.
Along the Panathenaic Way (fig. 5), recent rescue excavations by the Α’ ΕΠΚΑ in the bed of the Athens-Peiraieus railway led to a revised interpretation of a row of square stone sockets, designed to hold upright wooden posts, which lies across the line of the roadway. The five post-holes were originally interpreted as part of the simple starting-line (hysplex) of an early racetrack, of the sort known from Priene and Didyma. New excavation now shows that they form part of a temporary roped-off enclosure (perischoinisma) and cannot be part of a starting line. Three sides of this enclosure are defined: the fourth, to the east, has not been found. An area of fill at the extreme east end of the section was therefore excavated to determine the full east-west dimensions. A sequence of seven hard-packed gravel road surfaces was excavated, dating from early Hellenistic (third century) to early Roman (first century BC-first century AD). The post-holes, originally dated to the late fifth century BC, lie somewhat lower down and remain to be exposed.
The road surfaces to the west were also examined. A series of several hard-packed level surfaces had suggested in the past that the road may have been used as a race track. Four surfaces above the fifth-century BC levels date from the first to the fourth centuries BC.
Author
Robert PITT
Bibliographic reference(s)
Unpublished Report.
Date of creation
2012-07-02 00:00:00
Last modification
2020-02-17 11:19:14
Picture(s) 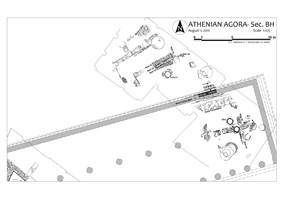 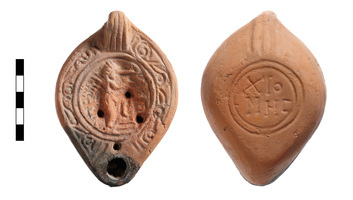 Fig. 3/ Athens, Agora. Lamp from Well 2:2 with a depiction of Eros playing a flute, and the name of the fabricant inscribed on the base. 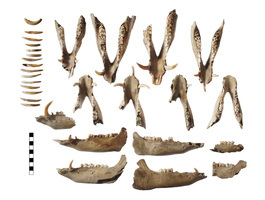 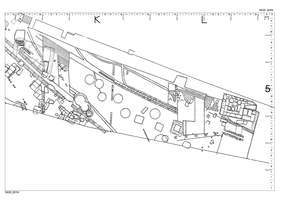