Key-words
Numismatics - Tools/weapons - Dress and personal ornament - Metal - Cemetery - Find Type - Material Type - Site Type
Type of Operation
Excavation
Institution
Δ’ ΕΠΚΑ.
Toponym
Kranidion
Linked Record
20082011
Report
Delpriza (Kranidi). A. Kossyva reports the discovery by the Δ’ ΕΠΚΑ of part of a Classical (fifth- and fourth-century) cemetery on the eastern slope of a low hill, 700m south of Koilada bay. The cemetery must belong to a rural community in a fertile area near the coastal town of Mases. A rural workshop with a stone oil press further north on the same hill is provisionally dated to the fourth to third century BC.
The 43 graves excavated extended in at least three rows over two artificial terraces, with a general north-south orientation regardless of type. Certain pit graves were set in close proximity to each other, likely reflecting a social group. They generally contained single burials, exceptions being two tile graves with two, and cist grave 39 with two superimposed burials and the bones of a third at their feet. Three infant graves were identified by their small size (only parts of the skulls were preserved). There was no surviving evidence for grave markers.
Most graves (25) are elliptical pits, two of which were covered with rough stones. There were 11 tile graves - elliptical pits in which the body was surrounded by and covered with Classical Laconian tiles, two of which had workshop marks. Child grave 4 had a tiled floor. Four cist graves lay in the north of the excavated area. Three were lined with worked or rough local limestone while the fourth had tiles set vertically along the long sides and worked limestone along the short: grave 1 was covered with stone slabs. Two simple burials were also found.
At least 38 adults and four infants are currently identified. The deceased were deposited directly on the earthen grave floor, mostly laid supine and extended. One body in grave 12, on its left side in contracted position, was probably moved to accommodate an infant burial (possibly a successive or contemporaneous burial of a mother and child). In most (22) cases the head lay to the south.
Only eight graves contained offerings as follows:
Cist grave 1: two iron pins at the right shoulder and a bronze ring.
Cist grave 39: an iron pin.
Tile grave 9: a silver Aeginetan obol.
Tile grave 17: a second half fifth-century Attic black-glaze skyphos of Corinthian type.
Grave 8: two kylikes (an Attic import and a local Droop cup) and an Attic Group 581, I lekythos with a Dionysiac scene, dating to 480–470.
Grave 26: an iron fibula was found near the left arm of the deceased.
Pit grave 23: two fifth-century miniature Corinthian kotylai and a spoon.
Grave 10: a small Classical Corinthian jug and an iron pin.
A local fifth-century skyphos may belong to grave 17 or grave 18.
An Early Helladic grave in the south part of the cemetery consists of an elliptical cutting in the bedrock, lined on three sides with at least three courses of unworked limestone boulders, and with a large stone jamb at the entrance on the east side. Immediately east of the door, a prothyron, or porch was indicated by a shallow formation in the bedrock. The grave superstructure is not preserved.
Inside the tomb were piles of human bones and skulls in successive layers: the upper layers covered the whole grave while the lower were confined in the west, opposite the entrance. At least 30 individuals are represented, initially laid in contracted position: the skulls were then placed around the edge of the tomb and the remaining bones piled in the centre. Offerings comprise obsidian blades, stone beads, 10 EH I vases and an EC I marble figurine akin to the Plastiras Group. The vases (some of which were intact) were mainly hand-made spherical pyxides with dark burnish or red paint, and incised decoration, plus a pyxis lid and a fragmentary double vase with red paint. They show many similarities with EC I pottery, mainly with the Kampos Group, and are not local products.
Evidence of contemporary activity over some 690 m2 in the immediate area of the tomb cannot yet be characterised (as related to settlement or only burial).
Author
Robert PITT
Bibliographic reference(s)
http://www.yppo.gr/0/anaskafes/pdfs/D_EPKA.pdf, p. 91.
Date of creation
2012-07-01 00:00:00
Last modification
2018-08-22 09:24:36
Picture(s) 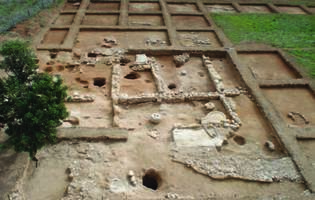 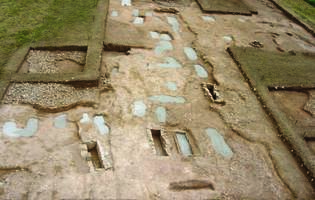 Fig. 3/ Delpriza. Cycladic figurine from the EC I grave. 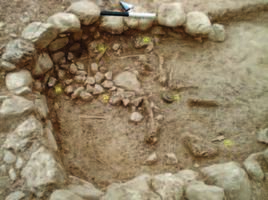