Key-words
Church - Religious building - Sanctuary - Public building - Architectural revetments - Public area - Building Type - Site Type - Find Type
Type of Operation
Excavation
Institution
22nd EBA.
Toponym
Nafpaktos
Linked Record
2010
Report
Naupaktos, Kastro. The 22nd EBA reports on excavation on the second and top tier of the Kastro, and at the church of Prophitis Ilias (Figs 1-2).
Excavation east of the church apse revealed the walls of an Ottoman sacred precinct, the south wall of which corresponded to the south wall of the church. The entrance to the main part of the precinct was via a door in the centre of the curved northwest side, aligned with the mihrab. The southeast wall of a second smaller, curved precinct was also found, touching the southern part of the apse. The side walls coincide with the walls of the church, and a small internal mihrab can just be made out, half destroyed by the apse of the church.
The foundations of the Byzantine church were also discovered. Trial trenches had revealed parts of a marble floor only 0.05-0.10m below the floor of the larger sanctuary. The east side of the church, which was founded on bedrock, had been destroyed down to its foundations, but traces of the three apses on the east side (three-sided on the exterior and semi-circular on the interior) were found. Excavation on the north and south sides of the church revealed evidence of the long walls of the Byzantine church. On the west side were the three main entrances to the church. In the north and south nave, exactly 4m from the east end, lay the marble stylobate for the Byzantine marble templon. The plan indicates that the church was a three-aisled, wooden-roofed Middle Byzantine basilica. It had at least two building phases, and the quality of construction is reflected in the marble paving in the north and south nave and in the relief marble revetments which the Ottomans used to pave the entrance path to the mosque.
Author
Robert PITT
Bibliographic reference(s)
http://www.yppo.gr/0/anaskafes/pdfs/22_EBA.pdf, pp. 71-72.
Date of creation
2012-07-01 00:00:00
Last modification
2018-08-22 09:24:36
Picture(s) 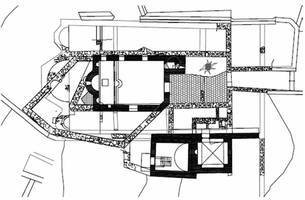 Fig. 1/ Nafpaktos, Kastro. Plan of the architectural remains around the church.