Key-words
Cemetery - Metal - Dress and personal ornament - Tools/weapons - Numismatics - Inscription - Tomb - Road system/waterway - Site Type - Material Type - Find Type - Building Type
Type of Operation
Excavation
Institution
ΛΣτ’ ΕΠΚΑ
Toponym
Nafpaktos
Linked Record
2004
Report
Langadoula (property of the Paralika-Lyberi General Partnership). F. Saranti (ΛΣτ’ ΕΠΚΑ) reports on excavation of part of the west cemetery of the city and of the ancient road which likely led to Thermon.
At least two monumental funerary periboloi faced towards this road.
Peribolos A contained on its north side two large cist graves with rich offerings: an inscribed pedimental stele was found fallen in the southeast corner. It was Π-shaped, built of large dressed blocks, and was located at the base of the Aetorachi height where the bedrock had been dressed to give a flat approach to the tomb entrances. The tombs were intact, their doors still sealed with plaster. They contained a total of 112 Hellenistic vases (mostly intact) of a great variety of shapes. Tomb I contained the remains of seven displaced burials piled along the east side, noting one cranium which bore the marks of surgery. One in situ burial lay along the west side. Thirty-four vases were found (lamps, lachrymateria, lagynoi, phiales, Megarian bowls, plates, kyathoi, lekythoi etc.), plus a pin, iron sickle, the handle of a silver kylix, a strigil with suspension ring and parts of other strigils, iron shears, numerous metal fragments and small finds, 124 astragalos bones, and seven bronze coins. Tomb II contained a similar arrangement of displaced burials on the west side and an in situ interment on the east. In the northwest corner by the door was a large round lidded chytra used as a cremation urn, probably the last use of the tomb. The tomb contained 78 vases (lagynoi, amphorae, prochoes, phialae, thilastra, lamps, lachrymateria, plates, a kantharos, conical bowls etc.), plus a bronze armlet, parts of strigils and metal tools, semi-precious stones, gold fragments and leaves, four knives, six coins, and fragments of bone pins. The tombs were used through the late third and mostly the second century BC, with the burials in tomb I ending slightly earlier than those in tomb II (noting a child burial in a tile grave by the door). Tomb II continued in use until the mid-first century BC.
Peribolos B, 1m to the west, was also Π-shaped, of medium-sized trapezoidal masonry. It largely fell outside the excavation plot, and its south side had been severely damaged in antiquity. A disturbed cist tomb (IV) containing a few bones, sherds, a gold earring and gold leaf lay on the west side. Two further roadside structures, Γ and Δ, were partially uncovered by the northwest and southwest parts of the road respectively. Simple in form, they were built of fieldstones. Two monumental tombs were found to the east of peribolos A – a child burial in a tile grave (V) without grave goods, and an adult burial in a cist grave (VI) with four Roman vases and a few small finds.
Author
Robert PITT
Bibliographic reference(s)
F. Saranti, ADelt 56-59 (2001-2004) B2, 116.
Date of creation
2012-07-01 00:00:00
Last modification
2018-08-22 09:24:36
Picture(s)

Fig. 1/ Langadoula. Plan of the excavation. 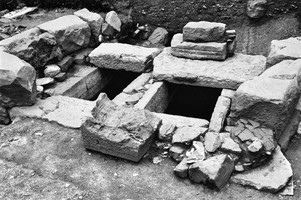 Fig. 3/ Langadoula. Interior of tomb I. 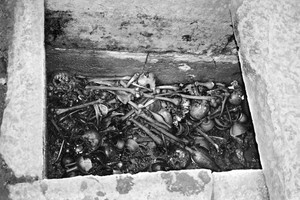