Key-words
Temple - Plant remains - Religious building - Domestic space - Sanctuary - Material Type - Building Type - Site Type
Type of Operation
Excavation
Institution
National Archaeological Museum
Toponym
Mygdalia, Glanitzia, Amygdalea
Linked Record
2011
Report
Mygdalia. The foundations of an impressive rectangular Mycenaean building were unearthed on Terrace 1 on the summit of the hill. The building was oriented on the northwest-southeast long axis of the roughly ovoid terrace. The main room (7.8x3.6m) contains two column bases and opens towards the north edge of the terrace. Behind it lay a second room (5x3.6m). To the north east was a long corridor (?) with a small room at the southeast end where LH IIIB/C domestic pottery (deep bowls, kylikes) was recovered in relative abundance compared with the interior of the main room (which was virtually empty of finds). This is clearly an important building, possibly a ruler's dwelling (Figs 1, 3). Inside the second room, an apsidal wall is associated with a destruction level containing fragments of stemmed goblets of MH III /LH I type. The apsidal wall belongs to an early Mycenaean building destroyed when the rectangular building was erected. This pottery assemblage provides a terminus post quem for prehistoric habitation on Terrace 1.
Stone bases (some excavated in 2009) belong to the peristasis of an early Archaic temple that partially covered the ruins of the Mycenaean building and extended to the south (Figs 2, 3). These bases follow the north-west axis and cover an area of ca. 16.5x7.4m. There are four at the east narrow side (the entrance), and eight at the south long side (counting the corner columns twice). Most are in situ and the others only slightly moved. Only one has been found on the north long side, at a higher level beside the wall of the Mycenaean building. Early Archaic pottery was recovered from the original position of that column on top of the ruins of the Mycenaean wall. Αn iron dagger and a bronze strigil were found in situ by the bases of the eastern peristasis, deposited at the time of the foundation of the entrance peristasis. Local limestone from the Mygdalia hill was used for the bases (as for the foundations of the Mycenaean buildings), roughly cut in rounded or rectangular shapes and levelled on the upper surface. This is the first early Greek temple excavated in western Achaea (in the Patras area), and the existence of a cult building after the destruction of the Mycenaean building, in a location which dominates the entire Patras area, is additional evidence for the importance of Mygdalia hill.
On Terrace 2 a large storeroom so far measures 15x4.1m (the south wall is still missing). Its roof was supported by a row of wooden columns along the axis, the stone slab bases of which are preserved in situ. In the middle of the room was a circular platform, 1.4m in diameter, defined with stones and paved with slabs and sherds of Mycenaean amphorae. It was found empty of finds (Figs 4, 5) and there were no traces of ash or burned earth. Its use remains unclear, although it may have supported a central pithos, wooden container or bronze lebes. A wall inside the room, parallel to the original long eastern wall, gave us evidence that in the course of its life, the edifice was partly destroyed and rebuilt in order to serve the same purpose. The floor deposit (Fig. 6) of the final phase contained at least six fragmentary storage vases (amphorae, pithoi), a few cooking pots and a monochrome deep bowl, dating the assemblage to the end of LH IIIC. For the first time, archaeobotanical studies were undertaken in a Mycenaean domestic context in Achaea. The soil samples analysed revealed the following plant species: olive stones, fragmented almond shells, distorted barley grains, weed seeds such as darnel and bedstraw, and legumes such as lentils. The presence of distorted cereals suggests their origin as refuse of cooking or processing for a specific type of food, ending up in the hearths of the settlement. Weeds indicate crop processing activities.
While the storeroom was in use, a stone lined cist grave was opened between its east long wall and a retaining wall that supported the upper level of the terrace leading to Terrace 1. The grave was covered with four heavy slabs, three of which were in situ (Fig. 7). It contained the burial two children (Fig. 8), neither of whom had surviving grave goods (apart from half a small bead). This is a rare instance of a well documented built child grave intra muros in an area where the scarcity of child burials in chamber tomb cemeteries has already been noted.
Trial trenches in the floor of the storeroom partly revealed the remains of an earlier house buried beneath it.
Author
Robert PITT
Bibliographic reference(s)
L. Papazoglou-Manioudaki (National Archaeological Museum). Unpublished Report.
Date of creation
2012-07-01 00:00:00
Last modification
2018-08-22 09:24:36
Picture(s) 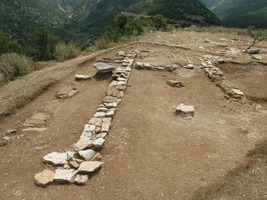 Fig. 1/ Mygdalia. Terrace 1: The Mycenaean building from the northwest. 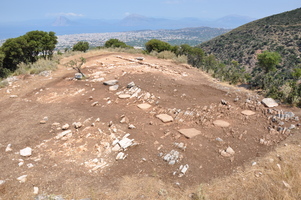 Fig. 2/ Mygdalia. Terrace 1: View of the Mycenaean building and the early Greek temple peristasis from the southwest. 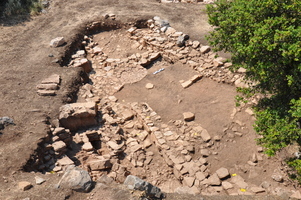 Fig. 4/ Mygdalia. Terrace 2: view from the north of the apotheke with its central circular platform and the cist grave to the east of the building. 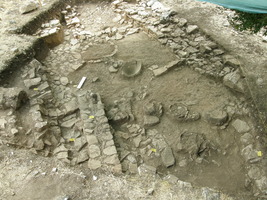 Fig. 6/ Mygdalia. Terrace 2: floor deposit of the final phase of the apotheke with pottery in situ. 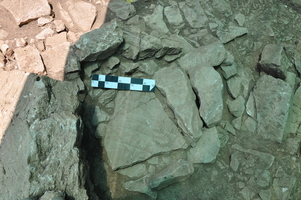 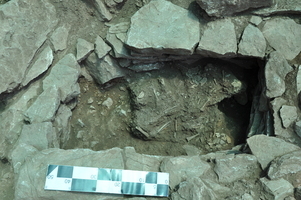