Key-words
Peribolos - Tomb - Figurine - Lamp - Sculpture - Cemetery - Building Type - Find Type - Site Type
Type of Operation
Excavation - Rescue excavation
Institution
Ministry of Culture and Tourism: Β'  ΕΠΚΑ
Toponym
Acharnes, Acharnae, Menidi
Linked Record
20002002
Report
Avliza – Gerovouno. Junction of Ritsou and Chalkidikis Streets. M. Platonos (B’ ΕΠΚΑ) reports on works on Eleusis – Stavrou Avenue, with the completion of excavation at the funerary periboloi studied in 2000 (Fig. 1).
In peribolos 2 another grave (ΤΦ9) was found: a sarcophagus of shelly stone (2.2 x 0.8 x 0.62m) with limestone cover slabs, its inner walls retaining yellow and red decoration. The deceased was laid supine, accompanied by two stone alabastra (Fig. 2), an black-glaze aryballoid lekythos, a bronze strigil and a fibula.
Within peribolos 1 was the offering trench of grave 2 (preserved length 0.6m), containing many small vessels (plates, skyphoi etc.).
The area north of the large outer wall (19.5m long) aligned with periboloi 1 and 2 to the east served as a façade for all four funerary periboloi. The west part of the area was disturbed, with only the eastern wall of peribolos 3 plus peribolos 4 (3.8 x 4.8m) preserved (Fig. 3). Inside peribolos 4, grave 8 (a secondary pyre) contained ash and a few cups, and was covered by five large worked blocks in secondary use, among them part of a mortar. North of grave 8 were pits with many Classical fine wares, miniature cups, lamps and fragments of figurines (Fig. 4); and between peribolos 4 and pit 4, a cutting in the rock (1.65 x 0.55m) probably for a grave.
Immediately south of the outer wall of the periboloi was a layer of hard-packed earth probably from a road. To the south, and at greater depth, was a destruction layer with material from the periboloi: ash, pieces of sculpture, a marble head of a dog (Fig. 5), and part of the head of a sphinx.
Author
Robert PITT
Bibliographic reference(s)
AD 56-59 (2001-2004) Chr., 396-398.
Date of creation
2011-06-30 00:00:00
Last modification
2018-08-22 09:24:36
Picture(s) 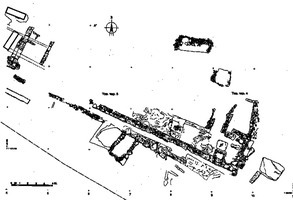 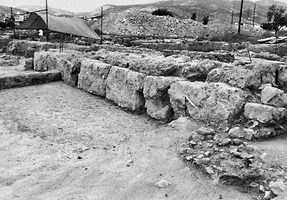 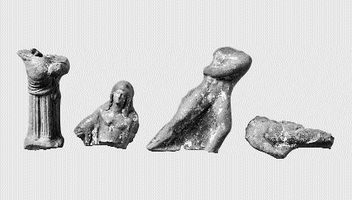