Key-words
Cemetery - Site Type
Type of Operation
Excavation - Rescue excavation
Institution
Ministry of Culture and Tourism: Β'  ΕΠΚΑ
Toponym
Porto Rafti, Limin Mesogaias
Linked Record
2003
Report
Porto Raphti, Drivlia/Venizes. Skyrou Street (Chounta and Philippou properties). O. Kakavogianni and K. Douni (Β’ ΕΠΚΑ) report on investigations following reports that this site contains a Mycenaean cemetery (Fig. 1). A chamber tomb was found with its dromos destroyed but oriented southwest-northeast. Bones were recovered near the entrance and a small pit to the west, covered with three slabs, contained the bones of an infant. The dead were accompanied by 14 pots.
In a trench 3.5m to the west of the first tomb, within the Philippou property, another chamber tomb was discovered, with the dromos oriented southwest-northeast and 3.8m long. The entrance was closed by a wall of rough stones. The deceased was accompanied by 11 pots and an animal figurine.
At the end of the fifth century, tile graves were dug above the chamber and dromos, containing aryballoid lekythoi.
The finds from the Mycenaean tombs date to LH III C, the period of the cemetery of Perati (Fig. 2). The Classical graves belong to a cemetery with scattered graves found earlier to the southeast along Athinon Avenue.
Author
Robert PITT
Bibliographic reference(s)
AD 56-59 (2001-2004) Chr. 342-343.
Date of creation
2011-06-30 00:00:00
Last modification
2018-08-22 09:24:36
Picture(s) 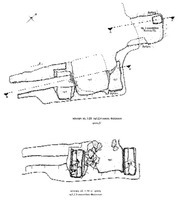 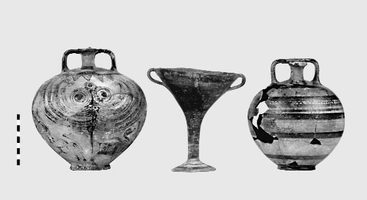