Key-words
Tomb - Figurine - Tools/weapons - Dress and personal ornament - Minerals - Bone - Cemetery - Building Type - Find Type - Material Type - Site Type
Type of Operation
Excavation - Rescue excavation
Institution
Ministry of Culture and Tourism: Ε' ΕΠΚΑ
Toponym
Sparte, Sparta, Lakedaimon, Lacedaemon
Linked Record
1999
Report
Sparta, Psychiko. E. Zavvou (formerly Ε’ ΕΠΚΑ, now Epigraphical Museum) presents the finds from a rectangular built tomb found in rescue excavation in 1999 on the property of the Sparta Gymnastic Club at Psychiko (Fig. 1). The site lies on the southeastern edge of the city near the former west bank of the Evrotas (see previously AR 52 [2005-6] 37).
The tomb was 2.5m long, 1.17m wide (tapering to 0.61m), 0.94m high, and had a side entrance on the east (Fig. 2). No trace of a dromos was found. The tomb contained only secondary burials, and is dated on the basis of its form and offerings to the transition from Middle Helladic to Late Helladic I. Inside the chamber, one collection of bones and offerings (including a cut-away-necked prochous with matt-painted decoration and a Vapheio cup, Fig. 3) lay to the south and west. To the north and west further offerings comprised a plainware kyathos, a small prochous, a cut-away-necked prochous, a terracotta boat model, and a zoomorphic askos, plus an amethyst bead, a cornelian bead and worked tusk from a boar’s tusk helmet. The remains of a further tomb lay close to the exterior of the entrance.
To the east of the tomb, in the area of the dromos, lay mingled bones from two burials plus a conical lead button or weight. Further to the east were two rectangular pit graves, with cover slabs resting on a row of small stones around the opening. Cleaning of the first, tomb 2 (2 x 0.9m, oriented northeast – southwest), revealed animal bones, many sherds, a miniature askos, and the remains of an earlier burial. The second, tomb 4 (1.24 x 0.36m) contained a child burial with a dark burnished handmade cup, a stone ring, and part of a bronze pin (?). Just to the west of the built tomb were bones from four infant burials. Three of these tombs (5-7) had stone cover-slabs, beneath which were many fragments of pithos and brick over the body. A further child burial (tomb 8, a stone-built cist 0.94 x 0.4m) was found at greater depth to the west of the above three graves. In addition to bone, the grave contained a pair of bronze earrings and a round piece of sheet bronze.
Pits containing bone from further destroyed burials were found at other points in the excavation area, along with sections of mud-brick and stone walls probably from buildings. No evidence for a tumulus was identified. Excavation around and below the child burials revealed a pit containing stones, fragments of brick, and a large quantity of pottery of the earliest phases of Middle Helladic, which confirmed the existence of a settlement in the area.
Most of the pottery from the excavation consisted of coarse pithoid vessels and cooking wares, often with plastic knobs (Fig. 4), impressed or incised decoration (Fig. 5), as well as ‘Adriatic ware’. The finer wares include fragments of dark burnished ware of local production. An earlier vessel with wavy line decoration is probably an import (Fig. 6).
Author
Catherine MORGAN
Bibliographic reference(s)
E. Zavvou, ‘Eυρήματα της Mεσοελλαδικής και της πρώιμης Mυκηναϊκής εποχής από τη Σπάρτη και τη Λακωνία’, in A. Philippa-Touchais, G. Touchais, S. Voutsaki and J. Wright (eds), Mesohelladika (BCH supp. 52), Paris/Athens 2006, 87-94; AR 52 (2005-6) 37.
Date of creation
2011-03-18 00:00:00
Last modification
2018-08-22 09:24:35
Picture(s) 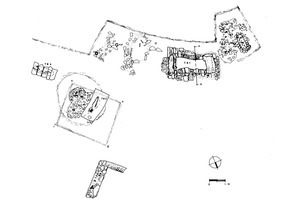 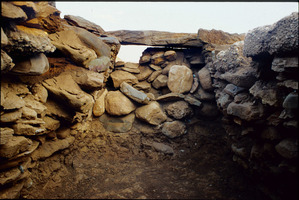 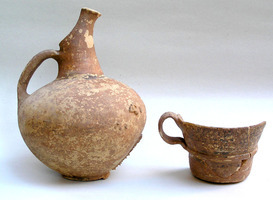 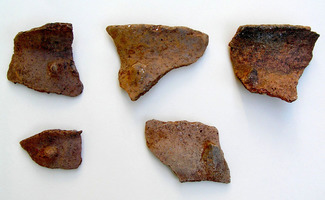 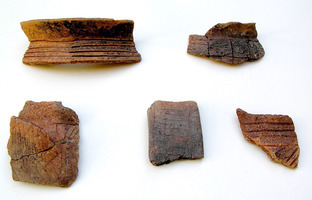 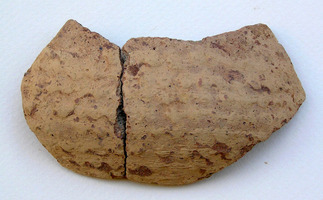