Ancient Sikyon. K. Kissas (Ephorate of Antiquities of Corinth), reports on the continuation of the excavation alongside the motorway of Eleusis-Tsakona in different sites of Ancient Sikyon. The areas excavated were between the kilometric positions 17+069 and 17+092, in sector A. With the completion of the excavation of the N part of the fifth and sixth trenches, part of the urban area of Classical Sikyon was revealed. The fifth housing block contained areas I through VIII (of which areas I and III were considered workshop spaces) and a tank (fig. 1,2,3)

Part of a Π shaped altar (only the middle part) was located below areas I and II. The N part of the altar seemed to be purposefully destroyed, while the S part was not found. The altar was positioned within a large rectangular trench within the natural soil, and the stones serving as its foundations were positioned on top of the processed bedrock (fig. 4). It was noted that a large pyramid-shaped stone was found directly on the N side of the upper stone of the altar, possibly in order to serve as a signal of the ritual area, to avoid further construction on top of it. An offering layer was located in the E side of the construction, containing about 130 serving vessels (kylikai, skyphoi, kotylai), dated between the first half and the middle of the fifth century BC (fig. 5).

A water distribution construction was located between the fifth and the sixth housing blocks, dated in the Archaic times (fig. 6). It must have been constructed before the private houses, and it was oriented NE-SW. It remained in use until the fourth century BC, and its excavation produces a large number of small findings, including pottery, loomweights, clay figurines, bronze coins and iron nails. Its stratigraphy presented continuous disposals of material dated in the fifth and fourth centuries BC, and a lack of earlier findings was possibly due to the regular cleaning of the construction while it was still in use. A stone-paved street was located on its E side (fig. 6). 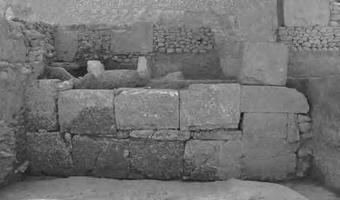 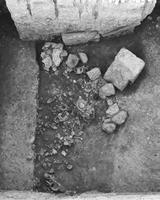 Fig. 5/ Offering layer of serving vessels (view from the E) 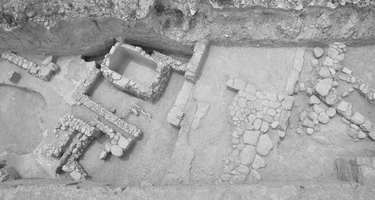 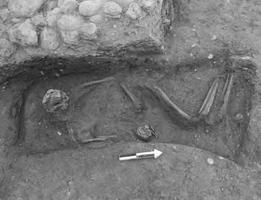