The presence of small finds has been used to suggest the purpose of this building (fig. 1). These finds include ceramics, but also small circular wedges used to support small vessels within a kiln, and also large versions for larger pots. Some ceramics retain a trace of red colour, but also some have purple, indicating the preparation of dye within them. There ceramics suggest that the kiln was in use in the second half of the second century B.C. and also the first century B.C.

Excavation proceeded in the E part of the building, where it was found that the structure was almost completely destroyed. Only a few tesserae of the mosaic floor survived, and the lower part of a pithos in the SE corner of the room. 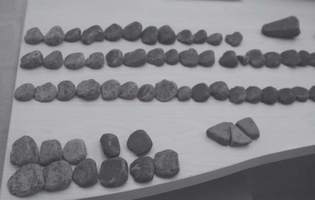