Skagia site, Vrachnaiika, Regional Route Tsoulakaiika-Industrial Area and Intercity Railway, Patras. Vasileios Argyropoulos (ΣΤ’ ΕΠΚΑ) reports on the excavation held due to the construction of the main pipe of the dam of Peiros-Parapeiros. In the aforementioned site, the excavation revealed the E side of a circular kiln (the resto of it was under the street and could not be excavated) (fig. 1).

The incision chamber was all that could be excavated, and even that was not intact, as the E wall was accidentally destroyed by the excavator. It was equipped with a combustion area, on top which a grid was placed. According to the grid and some pottery sherds, the kiln was dated between the late Classical and the early Hellenistic times. 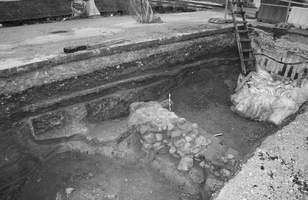