Mantilo site, Haradros river, Velvitsi, (private property of Med Frigo PLC) Patra region. Christina Katsarou (ΣΤ’ ΕΠΚΑ) reports on the rescue excavation held in Diodorou street, on the W bank of Haradros river. Some buildings were revealed, all belonging to the wider complex of a farmhouse with different chronological phases and some repairs dated in the Roman and Late Roman times, whereas its initial use must have began during the Hellenistic times (Fig. 1).

Building A belonged to a bath (Fig. 2), and it consisted of rectangular spaces, fragmentarily preserved, and from an arched-ceiling space. In this last area, parts of hypokafsta were identifed, while parts of mosaic floors were found in the rest of the areas, while the walls were built in opus reticulatum (Fig. 3-4). The mosaic of area 2 belongs to the initial construction of the bath (late first century BC) (Fig. 4). A piping system and a private bath were located in the N of the main baths (Fig. 5).
A grinding stone was found in the easternmost area of Building B (Fig. 6), and near that a destruction layer made of tiles.

In the NE corner of X6 space, a similar mosaic floor was found, with a destruction layer nearby, while in its SW corner, a rectangular construction was located (Fig. 7). A ceramic kiln was found in the same area (Fig 7).

Fig. 1/ Charadros of Patras, Mantilo location. General view of the excavation from N 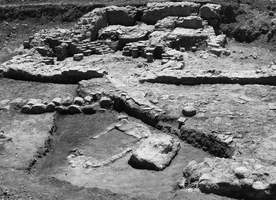 Fig. 2/ View of the bathroom from N 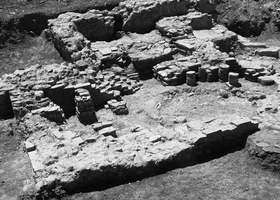 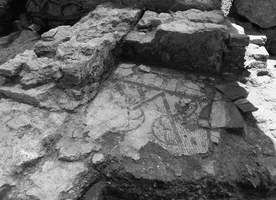 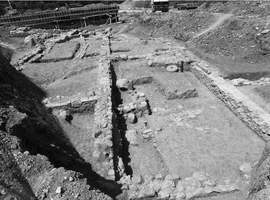 Fig. 5/ General view of the excavation, shot from the S 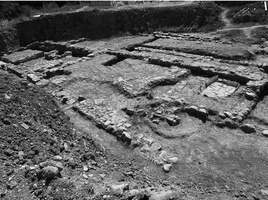 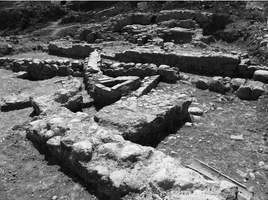