Marathon, Brexiza. I. Dekoulakou (ASA) reports on continued excavations at the Sanctuary of the Egyptian Gods, particularly in Rooms 24 and 25.

The floor had a fine layer of sand on which fragments of paving slabs were found, pieces of red and off-white plaster, Laconian rooftiles, coarse pottery and kitchenwares, all of which give an indication for the use of these rooms.

Another upper part of a Corinthian capital found in 2018 was located. Spread throughout the floor, there were also pieces of pointed-toe amphoras, Laconian tiles, and other vessels. 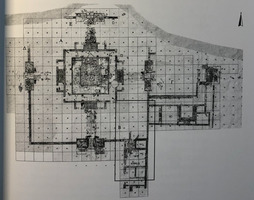