Sochora (plot of C. G. Xexaki), Chamalevri of the Municipality of Rethymno - 2009

Toponym
Chamalevri
Linked Record
2009
Report
Sochora  (plot of C. G. Xexaki), Chamalevri of the Municipality of Rethymno. Maria Andreadaki-Vlazaki and Eleni Papadopoulou (ΚΕ’ ΕΠΚΑ) report that the C.G. Xexaki plot is part of the protection Zone A of Stavromenos-Chamalevri, and that during 2002, trial trenching commenced due to the fact that the landlord wanted to proceed to the replacement of her olive trees. Minoan architectural remains came to light in the entirety of the plot and thus a detailed archaeological investigation took place in 2009 at the SW part of the property.

Out of 25 trenches (3x4 m.), nine were thoroughly investigated (8, 9, 10, 11, 15, 16, 24, 25, 26). Part of a building complex dates around the end of the Pre-palatial period, the transitional EM III/MM IA period (Fig. 1)  and it extends to the MM IB period. Four elongated rooms (Α, Β, Γ, Δ) and five spaces (Α, Β, Γ, Δ, Ε, ΣΤ) were discovered, bearing evidence of disturbance due to the long term cultivation of the field. The walls were made of crude limestone, while the floors were mainly earthen, with a few of them also having a thin layer of red plaster, such as floor 13 in room Δ.

In the interior of spaces Α and Γ, as well as in room Γ, circular clay hearths were found in the ground, with a central opening and an elevated rim. These were potentially used as light sources, while the largest of them in room Γ was elaborately made (Fig. 2) . Originally rooms Γ and Δ seem to have been uniform but were later divided in two thanks to the addition of wall 12, since a hearth was detected at the entrance of room Δ, while pit 3 of room Γ which contained a variety of EM III/MM IA vessels,  extends underneath the wall.
A carefully constructed cobbled path/corridor was also discovered at the S part of the complex. It seems to have been some kind of limit between the MM building and the extensively destroyed space ΣΤ which was potentially a semi-outdoor space. On the path and its sides, a multitude of different clay vessels, such as cups and jugs, as well as stone tools, such as grinders, axes and obsidian  were unearthed. These objects were probably suggestive of the existence of a workshop area, similar to the one in the area of Mpolanis in Chamalevri .

Two main architectural phases during the MM period were identified, as well as a few repairing works in between, which are more visible at the N part of the building that is less disturbed. The majority of the pottery that was found during the excavation derived from layer 2; it seems that the space was used until the final destruction took place. In total 53 vessels along with 117 small finds and four stone vessel fragments were excavated. The pottery consisted of handless conical and carinated cups, some of which were painted, jugs with incised, “light on dark” or colorouful decoration, bridge-spouted skyphoi, pithoid vessels, buckets, as well as a few lekanides, beehive parts, and barbotine ware.

During the early LM IIΙC period deposit pits were added in the space. Two circular openings (pit 1, pit 2) that contained dark grey soil mixed with ashes, small stones, a few animal bones, tools such as grinders and obsidian, as well as painted skyphoi, were excavated. Both pits were found on top of the MM building, having destroyed parts of its walls. 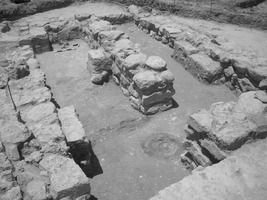 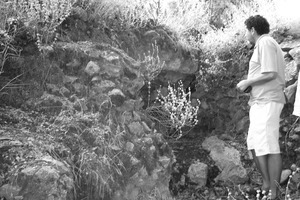