Key-words
Theatre - Stoa - Inscription - Mosaic - Sculpture - Entertainment venue - Public area - Production/extraction site
Type of Operation
Excavation - Research excavation
Institution
Archaeological Society of Athens
Toponym
Messini (ancient), Messène antique
Linked Record
19931995199719981999200020022004200620072008 (1)20082009 (1)20092010 (1)20102011201220132014201520162017201820192020
Report
Messene. P. Themelis (ASA) reports on a further season of excavation in the theatre, the north stoa in the agora and the monopteros.
In the theatre, the east retaining wall of the koilon was completely exposed to its lowest course. This is also the north wall of the skenotheke of which the east wall and the stylobate of the south side are preserved (Figs 1-3). Three parallel channels in the floor of the skenotheke allowed the movement of wheeled wooden scenery into the orchestra from the end of the third century BC to the first century AD (Fig. 4). Behind the north wall of the skenotheke lay the sloping floor which led to the middle diazoma of the koilon (Fig. 5). In the 10th to 11th century AD, the east retaining wall was levelled, and workshops and lime kilns built within the foundations of the koilon. Among the building material used is the base of a marble statue of a boxer victorious in the Pythian games and in the Basileia at Levadeia.
East of the theatre, beside the spring of Arsinoe, is the Π-shaped stoa which forms the northern boundary of the agora (Fig. 6). The western part was excavated in 2009; parts of the internal Corinthian colonnade had inscribed bases for bronze statues. One base fragment preserves a depiction of a conical helmet in relief.
East of the apse of the basilica in the theatre area, and mostly beneath the basilica, lay the stylobate of a round Doric building (10m in diameter) with many of its columns collapsed around it (Figs 7-8). Around and outside the stylobate was a second concentric circle of limestone slabs belonging to an older construction. A multi-coloured stone and glass mosaic floor between the two foundations depicts several over life-size figures named in black stone captions: one of the male figures carrying a staff is named Atticus, perhaps the father of Herodes Atticus (Fig. 9).
An inscribed statue base west of the round Doric building bears a dedicatory inscription from the captains to Capitoline Zeus.
Author
Catherine MORGAN
Bibliographic reference(s)
Ergon (2009), 42−48
Date of creation
2010-12-07 00:00:00
Last modification
2021-05-24 21:25:10
Picture(s) 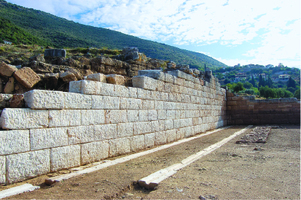 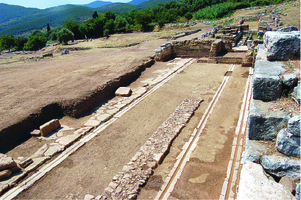 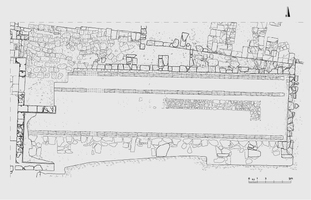 Fig. 4/ Messene: plan of the skenotheke. 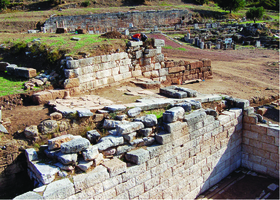 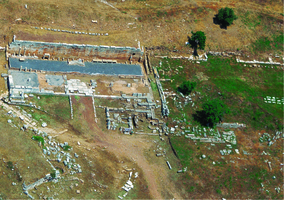 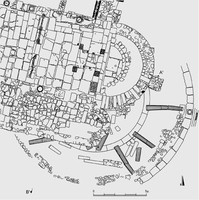 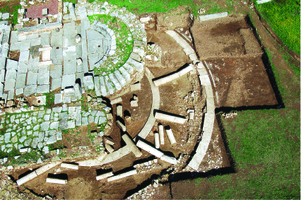 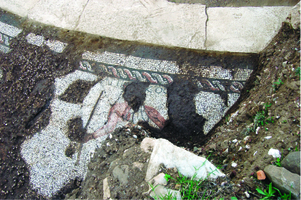 Fig. 9/ Messene: mosaic in the monopteros.