Property of Mpatistaki Brothers, Kissamos. Stavroula Markoulaki (ΚΕ’ ΕΠΚΑ) reports that during the excavation of the property, part of a Greco-Roman house was discovered at the S end of the ancient town, at a distance from the large urban villas. It consisted of three main rooms (A-Γ), a corridor with a drain and potentially a storage room with vessels (pitheonas) (Fig. 1).

The house has an N-S orientation, with the entrance hall (Room A) located at the S. This is the only room with a mosaic floor. Based on its design with a central arrangement, and the Π-shaped the geometric decoration that is surrounding it, this space was interpreted as a triclinium, like the ones found in rooms for symposia/convivia. The remaining part of the floor is 5 m. wide, while its walls are partially preserved at 0.50 m. The east wall seems to also be the external wall of the house; it is thicker than the other ones and it was built with the opus africanum technique, examples of which have not been found elsewhere in Kissamos (Fig. 2,3).

The motifs of the mosaic are characteristic of the local production of the 3rd c. AD (Fig. 4). The main composition is comprised of colourful tesserae, from which some were made of terracotta. A circle is visible in the centre, containing six figures that have been partially preserved (Fig.). The only fully preserved figure is possibly Clio, the Muse of history, and consequently, it is suggested that the theme of the mosaic was the nine Muses in relation with two more figures, a standing and a seated one. The standing male figure is potentially Apollo. The quality of the mosaic floor seems to be lower in comparison with those found in the villas of Kissamos, however its synthesis and design are of great interest.

Indoor spaces of the house

Rooms Β and Γ (36 and 33.60 square metres respectively) were originally approximately of the same size as the triclinium, however at some point they were divided by thin walls with no openings, and as a result more rooms were created. The floors of these rooms were made of soil and lime (Fig. 6). The purpose of each room has not been identified due to the absence of vessels and other characteristic finds that could assist in their interpretation. Room B is connected with the triclinium through a 0.86 m. opening, while a cabinet can be found at the wall that divides the two rooms. In the destruction layer of Room B, a large intact stone deriving from a pilaster at a large opening of the house was found. This 2.40 m. opening was leading towards a yard in the W, its doorstep was covered in slabs, while the grooves for the door were still preserved (Fig. 1,7,8,9).

The mosaic was dated to the 3rd c AD based on its style, while the repairing evidence suggests that the floor was in use for a long time. The selected coins that were found above each floor were dated to 235-251 AD, providing a terminus ante quem regarding the construction of the house, around the 1st quarter of the 3rd c. AD. Due to the fact that the pottery has not been cleaned or restored yet, it cannot be used for dating at the moment.

Based on the fire traces found on the earthen floors Β and Γand the mosaic floor, it is possible that the house was destroyed by an earthquake followed by a fire. 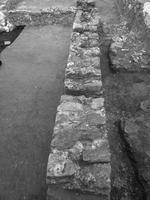 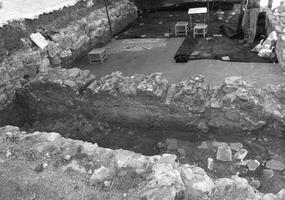 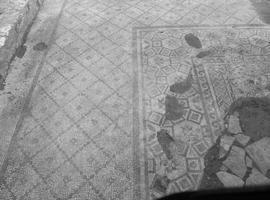 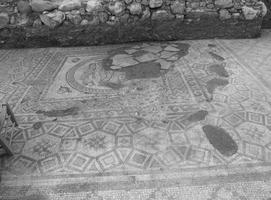 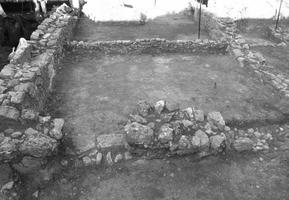 Fig. 6/ Indoor space of the house 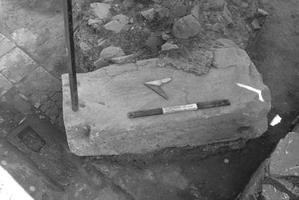 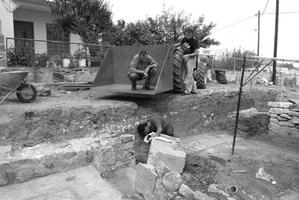 Fig. 8/ Repositioning of the stone pilaster Fig. 9/ The stone pilaster at its original place