Key-words
Basilica - Tomb - Religious building - Cemetery - Building Type - Site Type
Type of Operation
Excavation
Institution
Ministry of Culture and Tourism, 5th EBA
Toponym
Sparte, Sparta, Lakedaimon, Lacedaemon
Linked Record
20062007
Report
Sparta. Alcman and Lysander Street (O.T. 127, E. Philippopoulou property). A. Bakourou and E. Katsara (5th EBA) report further investigation (in 2000-2002 and 2006) of a Byzantine olive press in an area where a basilica and Middle Byzantine bath have previously been found (see ADelt 53 [1998] Chr, 221). The proximity of the press to these buildings reflects its public character and place in local town planning. The conglomerate press-stone was located, plus two further stones which form part of the press.
The extension of excavation to the north revealed the northern walls of the complex (in places under destruction deposits), water channels and tile floors. The monolithic trapetum was founded in a layer of unworked stones, clay and cement. To the east and west was a stone platform, to the south a wall, and to the north a platform of tile and cement probably to rest the sacks of olive pulp. The press used to extract olive oil from the pulp left after the whole olive had passed through the trapetum (fig. 1) consisted of two marble bases (one four- and one six-sided) 2.26m apart. These bases had a round cutting in the upper face (canalis rotunda) feeding into a spout which channelled the oil into two vessels set below, parts of which were preserved in situ (fig. 2). The monolithic, roughly rounded press weights were found to the south (fig. 3).
Just to the northwest of the workshop lay the remains of a Middle Byzantine house: evidence of at least four rooms was found, with columns and fine plaster floors and columns.
Pottery collected from the plot dates from the Hellenistic to Byzantine periods, noting also glass vessels, terracotta and metal items, bronze coins, and two Byzantine lead sealings.
Author
Catherine MORGAN
Bibliographic reference(s)
ADelt 55 (2000) Chr, 268; http://www.yppo.gr/0/anaskafes/pdfs/5_EBA.pdf.
Date of creation
2010-12-07 00:00:00
Last modification
2018-08-22 09:24:33
Picture(s) 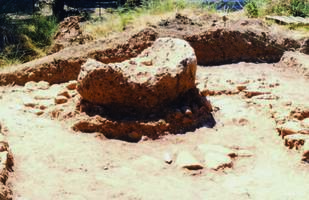 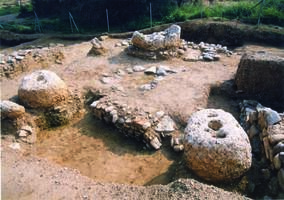