Theotokis Theodoulou (Ephorate of Underwater Antiquities), Carl Knappett (Toronto) and Andrew Shapland (Oxford) share this summary of the first year of fieldwork in a new three-year collaboration between the Ephorate of Antiquities of Lasithi (Chryssa Sofianou), the Ephorate of Underwater Antiquities and the BSA. In July-August 2021 an underwater survey was conducted in the area around Palaikastro. Sporadic underwater finds over the years have suggested sea level change and an ancient shoreline in both Chiona and Kouremenos Bays that was considerably further out than it is at present, marked by extensive beach-rock slabs. The survey mapped and described these submerged structures in detail for the first time. They date to both the Bronze Age (Minoan) and Roman periods.

Work began by mapping remains in the shallow waters along the coastlines of Kouremenos and Chiona Bays. Underwater photographs were combined using photogrammetry to create 3D models of the submerged remains. It was also eventually possible, after many days of strong winds to fly a drone over both Kouremenos and Chiona Bays, taking georeferenced pictures for photogrammetry in order to process a 3D model and an orthophotomap of the entire area. Scuba diving also allowed for the exploration of Cape Tenta, immediately to the north of Kouremenos Bay, the two further capes to the north (towards Vai), the southeast side of the islet of Grandes, and most of the northwest side of the Plaka peninsula (Cavo Plako).

All the Bronze Age structures mapped so far are in Kouremenos Bay, north of Kastri. Towards the north, about 500 m south of the harbour, but still in the northern half of Kouremenos Bay, there is a rectangular structure submerged at c. 2.2m depth together with other walls nearby that are likely further Bronze Age structures. At least two rooms were discernible and a possible stone floor. At this depth and with this kind of wall construction these structures are very likely to be Minoan.

To the south at a location locally known as Plakopoules, close to the hill of Kastri, there are remains of a circular structure also at a depth of 2.2 m with associated pottery revealed in superficial cleaning potentially indicating a much earlier use in the early 3rd millennium BC. There are tholos structures of comparable size and construction of EM I date elsewhere in east Crete (e.g., at Mesorrachi, near Sitia). Immediately north of the building a series of large pithos fragments were located, concreted into sections of beach rock; these too are found at an average depth of 2-2.5m. One of them with rope decoration is of a distinctive type that can be dated to the Late Minoan I period.

Structures from the Roman period can be found in both Kouremenos and Chiona Bays. In the former, just to the northeast of the modern harbour, a Roman mole (harbour work) at a depth of 1.4 m was relocated and photographed. It consists of a massive dump of rubble and had initially been identified as a Roman mole by A. Simosi (now Ephorate of Antiquities of Euboea), in the course of the construction of the modern harbour installation in 1985 (Κρητική Εστία 4 [1988] 19-29).

The remains of tumbled walls from Roman buildings were found west of the harbour, within a wider area of decomposed building material. The maximum depth of these remains is c. 1.5 m.

On the other side of this harbour were a series of submerged buildings at c. 1 m depth. Similar submerged buildings were also located at the north end of the Chiona Bay; these too had previously been identified by co-director Theotokis Theodolou and published briefly in 2020 (Πρακτικά Δ΄ Αρχαιολογικό Έργο Κρήτης, 152), but were re-photographed and studied.

Although hampered by persistent strong winds, exploration undertaken further out from the shoreline and at greater depths, revealed a significant discovery: a Roman wreck dating to the 2nd century AD northwest of Cape Plaka. Loaded principally with Beltran IIB amphorae, it is in good condition, with about 240 vessels in its surface layer. It is about 13m long by 8m wide, and lies at a depth of between 19.5 and 23.5 m. Most of it is located on a sandy terrace, giving reason to believe that some of the wooden hull might be preserved beneath. 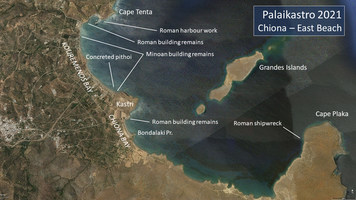 Fig. 1/ Overview of the Palaikastro coastal area, showing locations of some of the key finds 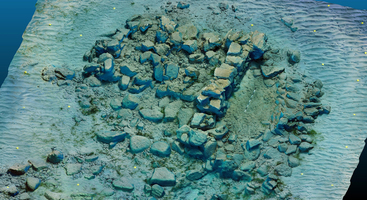 Fig. 2/ Remains of a Minoan building in north Kouremenos Bay 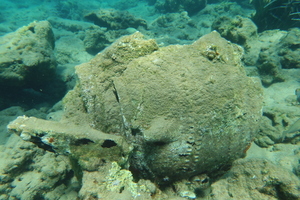 Fig. 3/ Circular structure visible at centre in background; and large fragment of LM I pithos (Plakopoules) 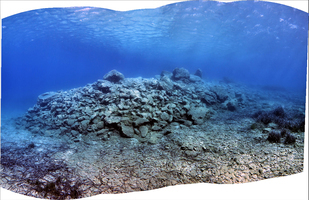 Fig. 5/ View of the Roman shipwreck