Key-words
Cistern - Well - Tomb - Figurine - Hearth/Kiln/Oven - Tools/weapons - Painting - Dress and personal ornament - Plant remains - Metal - Bone - Hydraulic installation - Domestic space
Type of Operation
Excavation - Research excavation
Institution
Archaeological Society of Athens
Toponym
Mycènes, Mykines, Mykinai, Mycena, Mycenae
Linked Record
19881988 (1)19891989 (1)20002002200420062007200820092010201120122013
Report
Mycenae. S. Iakovides (ASA) reports on continued excavation in the lower city and on a geophysical survey of the area (Fig. 1).
Hellenistic structures were oriented towards the Hellenistic theatre. A thick layer of reddish-brown soil separated the Hellenistic and Archaic remains from the Mycenaean and Geometric beneath. At the northwest edge of the excavation area, an originally round, thick-walled structure was transformed into an apsidal building by the addition of side walls. Inside were stones, unfired bricks and tiles, plus Hellenistic sherds which date the use of the structure as a cistern or well. To the west was a round stone hearth, preserving material from its use phases including ash, charcoal, animal bone, burnt olive pits, Mycenaean figurines, sherds and a small clay disc. Middle Helladic, Geometric and Archaic sherds were also found (Fig. 2).
Building remains south of the well included a main wall (12m long), to the west of which were Mycenaean sherds, figurine fragments, a half-finished sealstone, stone tools and two iron arrowheads. (Fig. 4). Ninth-century tomb immediately to the east postdate the wall. Another wall runs north-south through the centre of the excavation area and is preserved to a height of 1.8m at the north end. A Mycenaean date is confirmed by artefacts found beneath it. Excavation in the south of the area continued to expose a long, narrow building (10m long x 1.8m wide), oriented east-west and partitioned into two rooms of unequal size. Fragments of ivory objects and animal bone were found in the west room, and in the east (which is divided into two smaller areas) were stone tools, stone sling-shot, an animal figurine (Fig. 3), pithos and cooking vessel sherds, and animal bone. Pottery was mostly Mycenaean with some Corinthian.
To the north of the long building, continuation of the 2008 excavation revealed three or four rooms. In the east room were figurines, a bead, animal bones and pottery of several periods. In the northernmost room were two child burials in small pits under the floor. One, with a slab cover, contained a one to two year-old and four beads, and the other the skeletons of two infants without goods. Small finds included Mycenaean figurine fragments, obsidian and flint, fragments of stone vessels, coins, lead sheet, iron nails, arrowheads and hooks, ivory objects, terracotta loomweights, pieces of plaster and wallpainting, pigments, animal bone, shell, much pottery and tile, cereal grains, and grape and olive pits.
Geophysical prospection over a large area of the east bank of the Chavos located the walls of a large building complex for future investigation.
Author
Catherine MORGAN
Bibliographic reference(s)
Ergon (2009), 29−32
Date of creation
2010-11-27 00:00:00
Last modification
2021-03-02 20:30:43
Picture(s) 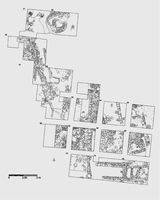 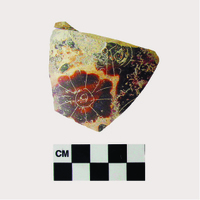 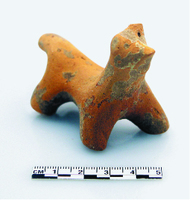