General Information
Record ID
1424
Activity Date
2010
Chronologies
Key-words
Type of Operation
Excavation - Rescue excavation
Institution
Ministry of Culture and Tourism, KZ' EPKA, ΛΖ ΕΠΚΑ
Toponym
Klenia, Kato Klainia
Linked Record
2010
Report
Ancient Tenea. The Ministry of Culture and Tourism reports the seizure of two kouroi recovered in restorable fragments from antiquities’ thieves in the village of Klenia near Chiliomodi. The statues are now held in the National Archaeological Museum. Kouros A is 1.82m high and kouros B 1.78m high. Both are of island marble and were probably made by the same craftsman. A date in the third quarter of the sixth century is proposed. Subsequent rescue excavation at the reported find-spot has so far revealed the right foot and part of the base of kouros A and the right foot of kouros B (the kouroi themselves had suffered extensive damage in the course of the illegal excavation). Nearby are two sarcophagi (on the basis of size, one for a male burial and the other, 1.6m long, for a woman) containing pottery and, in the case of the ‘female’ burial, iron dress pins. Among the pottery is a kylix of the third quarter of the sixth century BC (ca. 530−510). A total of 77 Archaic, Classical and Hellenistic tombs were found (44 limestone sarcophagi, 30 cist graves and two enchytrismoi), plus part of a road (identified as the kontoporia). The twin kouroi were placed over two sarcophagi in the most prominent part of the cemetery, a child burial in a sarcophagus made a decade previously having been moved slightly to the west to make way for them.
In August 2011 the kouroi were returned to Corinth Museum from the National Museum for conservation and display.
Author
Catherine MORGAN
Bibliographic reference(s)
Ministry of Culture and Tourism press releases 18/05/10, 01/06/10. Subsequently, Eleftherotypia, Ethnos 21/09/10; Ethnos 09/11/10, 20/12/10; Adesmevtos Typos, Ethnos 26/05/11; Ethnos 08/08/11; Rizospastes, Eleftherotypia, Ethnos 09/08/11; Rizospastis 12/08/2011; Ethnos 16/08/2011; Adesmevtos Typos, Eleftheros Typos, Eleftherotypia, Ta Nea, Naftemboriki 17/08/2011; Expres, Ethnos, Imerisia, Kathimerini 18/08/2011; Isotimia 20/08/2011; To Arthro tis Kyriakis 21/08/2011. 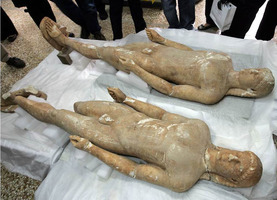 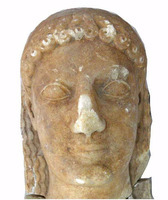 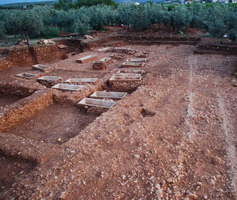 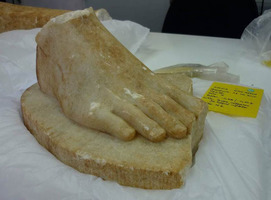 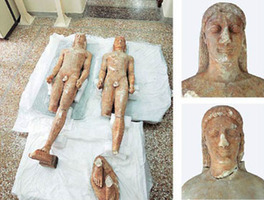 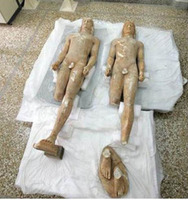 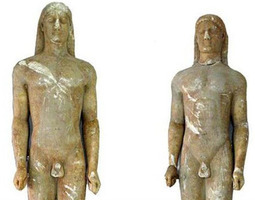 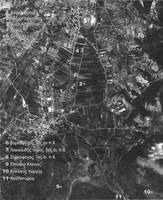 Fig. 9/ Overview of the finds from the region between Chiliomodi and Klenies 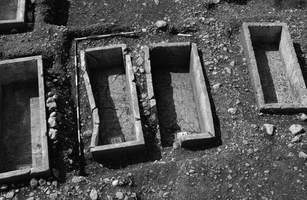