Galiatsos Property, Nea Chora, Chania. Sofia Preve (KE’ ΕΠΚΑ) reports that in 2008 the “deconstruction” of specific architectural remains found in the Galiatsos property in Nea Chora, Chania (Fig. 1) took place, for the purposes of the erection a seven storey building. The excavation, removal of the walls and pits, and backfilling at the SW part of the property prior to the construction works was approved (Fig. 2).

A Hellenistic pit (Pit A), two Archaic ones (Pit ΚΓ and ΚΔ) as well as a modern one were found; An earthen floor (Floor α’) was also uncovered at the NW part of the building. At the NW part of the property (where the deconstruction of the remains was going to take place) a new pit (Pit ΛΒ) dating to the Early Classical period was discovered. The partially preserved wall foundations of potentially Archaic buildings were also removed (Walls 19, 20, 25, 28, 32).

The excavation of the large refuse pit ΙΖ continued but the bottom was not reached. However, it was ascertained that the pit was opened at the spot of a destroyed built well (Well 2), after the destruction and backfilling of the latter (Fig. 3). Pit ΙΖ (Fig. 4) contained a large concentration of pottery, mainly Hellenistic and Early Roman, with a few Classical, Archaic and Geometric sherds being present. Fragments of vessels of various shapes and sizes were collected (e.g. amphorae, cooking pots, lids and pedestals etc), along with other finds such as as tiles, loom weights, a column base etc. Only a few animal bones were found. Southwest of the well, an irregular circular opening (Opening 3) was excavated. It was very deep and its bottom was not reached. It also contained pottery, with painted vessels of the mid 6th-early 5th century BC and fragments of painted tiles being notable. It seems that some of its contents were discarded during a building phase that was slightly earlier than that of the Buildings A and B. 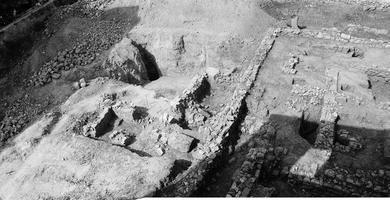 Fig. 1/ The south part of Building A and Pit ΙΖ, from the East 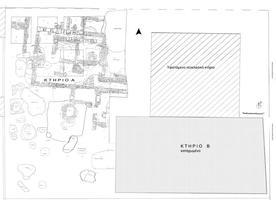 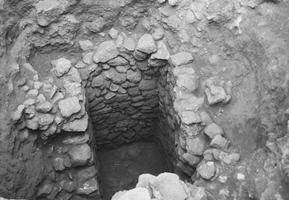 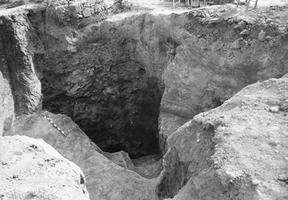